Time for a giveaway

Well, I have just realised that I am getting close to 200 posts so I think I should have a giveaway.  This will be post 193 and all comments from now till I reach 200 will go into the hat, probably for a glasses case and some other goodies - I haven't really decided yet.
Blogger has changed the way we load photos again, I suppose it is an improvement - but it has taken me ages to get these photos up as I was not sure what I was trying to do..........grrrrrr.  I am not sure I like change much any more, takes too long to work it out. 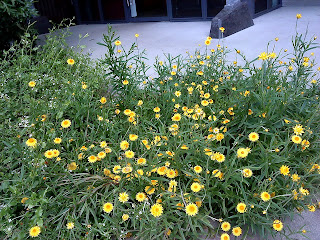 These yellow everlasting daisies are making a lovely show at the front entrance of the Botanic Gardens just now.  When we were first married we used to see them along the sides of the roads all round the district, but I haven't seen them growing wild for years now.  I think the sides of the roads have been poisoned to keep the grass down, but of course, everything else is poisoned too. 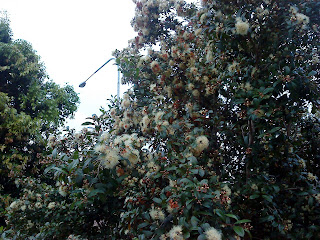 This is syzygium australe with a lovely show of fluffy white flowers.  Later it should be covered in red berries and one of our volunteers with be busy making jam, well she will if she can beat the birds.  they love the berries too. 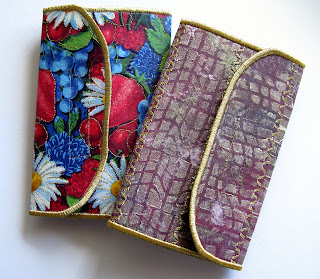 These next photos are of some more padfolios I have made lately.  Two of them are from paper napkins and make such a lovely bright show. 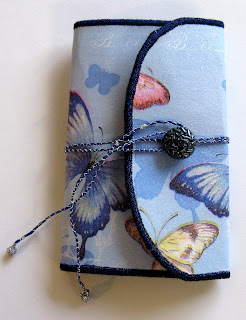 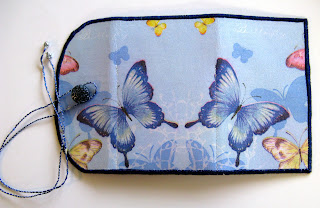 I had hoped to spend the weekend in the garden, but the rain has put a stop to that.  September is supposed to be the driest month of the year up here, but definitely not this year.  We had a deluge of 200 mm on Monday, then drizzle for most of the rest of the week, before the rain really set in again today, 80 mm so far and it is only 4.30 pm.  I think I can hear the weeds growing.  I have a huge crop of oxalis which has sprung up, it has a very pretty pink flower, but I would much rather be rid of the wretched stuff.
Posted by Robin Mac at Saturday, September 25, 2010 10 comments: 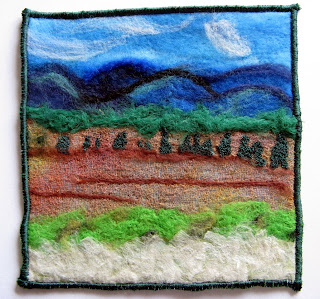 This is the fabric page I made for Claudia for September.  Her theme is landscapes. 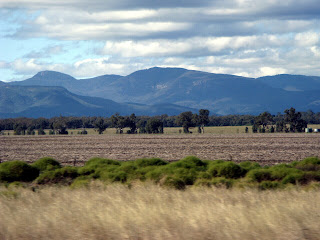 This is the photo I was trying to interpret in needlefelting, with a  bit of free machine embroidery added to it.  This is a photo of the Moree plains in northern New South Wales - not very far from wher I grew up.  We drove through the area on our trip to Sydney last year and I have been looking at the photo ever since thinking I should do something about it! 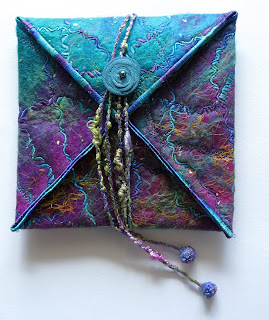 This is a silk paper pocket made from directions in an article of Jill Amanda Kennedy in Quilting Arts Gifts
magazine.  I love the colours and I know my niece for whom I made it loves those colours as well.  I think I may make a few more of these to send to the souvenir shop.  They are easy and fun - well it was easy after I resorted to the sugar and lemon juice treatment for my gardening hands!  I used several types of hand cream, but the fibres kept catching on my fingers, so I put a spoonful of sugar in the palm of my hand, then squeezed some lemon juice onto it (over the sink of course) and rubbed away like mad.  My grandmother always kept a piece of lemon near the washing up things and did this when she had finished.  It is brilliant, acts like sandpaper and gets your hands as smooth as can be.  Some of the old remedies are still the best. 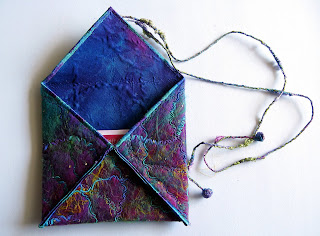 I have been reading about gelatin prints in several blogs so decided I might give it a go.  I am quite pleased with these as my first attempt. 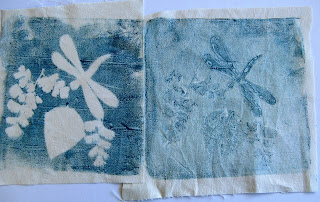 The ones above are both on fabric, but the positive image below is on paper, just a bit of maiden hair fern from my garden, quite effective though. 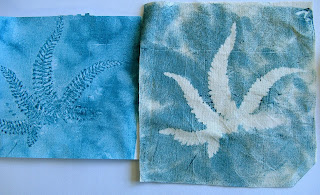 Time to go out into the garden.  We are having the most glorious weather, rain is forecast for tomorrow, but I am not sure I believe the forecast so I shall do a bit of watering before we go off to the family for a barbecue dinner.
Posted by Robin Mac at Saturday, September 18, 2010 9 comments:

More from the Gardens 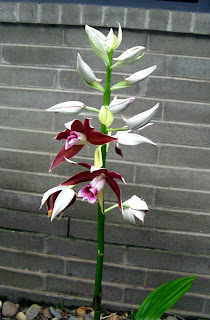 This lovely swamp orchid is flowering in the shade garden.  It grows in the wild at Eungella, a mountain range west of Mackay.  A friend of mine has potted up some from her property there to give me to plant in my garden so I hope I don't kill them. 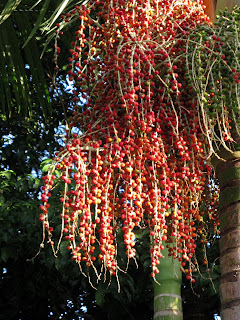 The seeds on this palm were such a vibrant colour I had to take a photo - can't remember which variety of palm it is, I am not particularly a palm fan 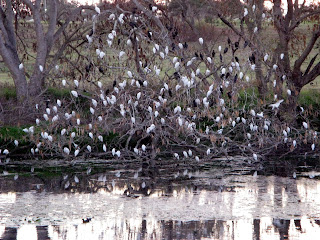 At this time of the year the egrets and cormorants all come in to roost in the trees on ethe edge of the lagoon to roost overnight.  According to all the books I have read they are not supposed to be migratory, but they certainly disappear from the lagoon in the hot summer months, only appearing in any numbers again in late autumn 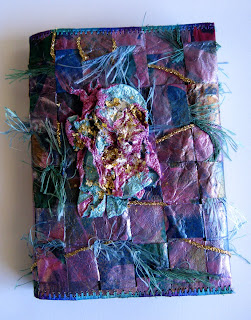 This photo is not very clear.  The cover is painted brown paper - with metallic paints - cut up and rewoven, then some yarns threaded through.  I painted some tyvetex (the lightweight tyvek they use in disposable overalls) and scrunched it together before blasting it with my heat gun.  Then I used a bit of embossing powder and gold flakes to highlight it.  The cover is for a small visual diary, once again to go to the souvenir shop.
Time to get dinner and I have been in front of the computer for long enough.  I had my 16th injection in my eye today, I am almost a fixture over at the eye specialist's, but if it keeps me seeing for a lot longer I don't care.  I don't ususally get many after effects, but I find it uncomfortable to concentrate for too long.
Posted by Robin Mac at Tuesday, September 14, 2010 5 comments:

The dinosaurs came to town and a prize postcard arrived 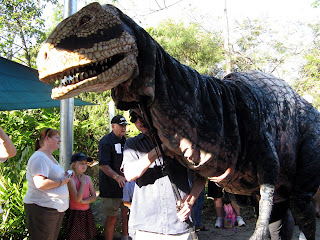 Today there were over a hundred young children at the Botanic Gardens, wandering round completing an educational quiz in our coal garden, which has dinosaur prints embedded in the concret path and various plants from the dinosaur era represented.  They were all waiting for this monster to arrive.  He was fascinating and very realistic, complete with appropriate noises.  I loved the textures of the fabric covering, some of which you can see in the photos. 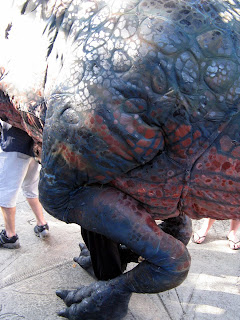 Alexander (red shirt) really wanted to get up close to pat the dinosaur.  Hamish thought he would like to, but the head suddenly bobbed towards him, so there was a hasty retreat to Dad's arms!  Some of the very small children were really frightened, but most of them just couldn't get enough. 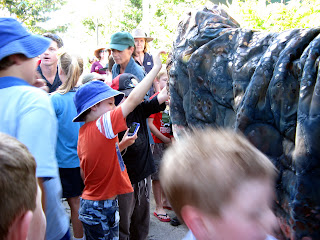 I think it was really advertising a show called Erth Dinosaurs which will have a couple of sessions at the local theatre tomorrow.  Anyway, a lot more people know where parts of our Gardens are now which they had never visited before. 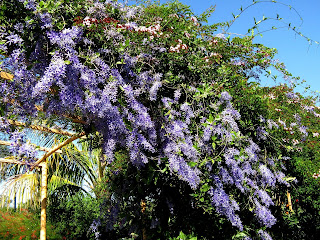 This petrea is in full flower on the trellis in the Heritage garden.  If you click to enlarge you will see a bit of the bauhinia scandens which is only just starting to flower. 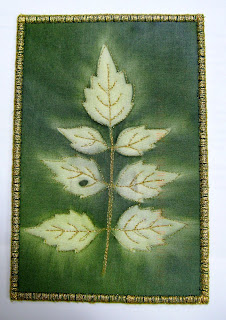 Vicki Welsh made this lovely sunprinted postcard for me as a prize for taking part in last month's Technique of the month.  I am thrilled to receive it.
Only a short post, I need to get dinner ready.
Posted by Robin Mac at Friday, September 10, 2010 4 comments:

Look what I saw! 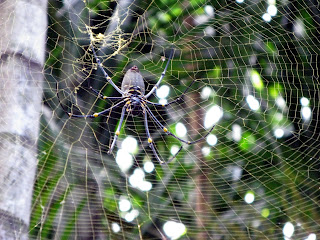 This will be a very quick post as I have to get ready to go to a meeting, but I had to show you these photos of a magnificent Golden Orb  spider taken in the shade garden at the Botanic Gardens yesterday.  The spider would be at least six inches, probably more, in size.  It is up high in a protected part of the Garden and the staff have been watching it for several weeks now. 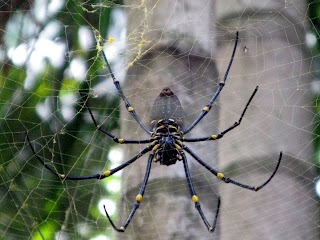 When you click on the photo to enlarge it you will see the wonderful gold of the web, also the gold of the joints.  I would hate to have that drop on my face, but I can admire it when it is out of my way! 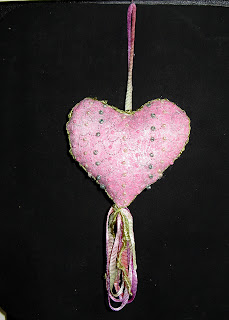 This pink heart was a birthday gift for a friend of mine.  The colours are a bit wishy washy for my liking, but my frined loves it and that is what matters.
I haven't even had time to catch up on other blogs for the last couple of days - we had birthday celebrations her last Sunday for our granddaughter Hannah, exhausting but a huge success.
Now I am visiting the chiropractor every couple of days as I seem to have done something to my knee and can hardly get up stairs - a real nuisance when I need to go upstairs to get to the computer and my work room!  He is working magic on it though so I should be back to normal soon.
Posted by Robin Mac at Tuesday, September 07, 2010 6 comments: