I know I have been very slack about blogging, but I did not mean to let February go past completely!

About two weeks ago Fiji was absolutely devastated by Cyclone Winston, a very severe category 5 system with wind gusts over 300 kph.  That system has certainly packed a punch.
It continued on its way towards the east coast of Queensland, fortunately becoming a tropical low.

The system ripped up huge seas and closed all the beaches on the Sunshine and Gold Coasts last weekend.  Then it travelled  north along the coast, still about 50 km out to sea, but causing lots of storms and heavy showers.  By the time it was sitting off Cairns (over 1500km north of Brisbane) it had embedded in the monsoonal trough.
We were still getting heavy rain and now the low has drifted south again! 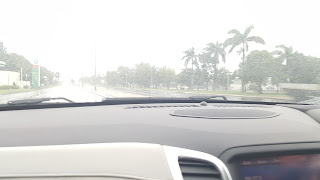 We have had our grandson staying for the weekend while most of his amily has been in Brisbane.  They are due to fly home tonight so we have our fingers crossed that the airport will be open.  We took Hamish home about an hour ago when we thought the rain was slackening off.  This is the view through the windscreen when we were coming home.  I took about 12 photos (I won't bore you with them all) and the windscreen wipers were going flat out all the time.  I can't believe that not one photo was dissected by wipers!  My phone is smarter than I thought. 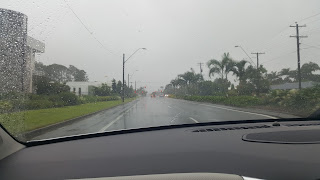 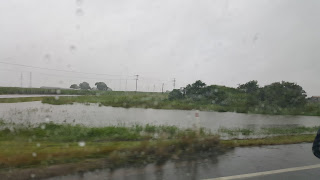 All the table drains are full and the low lying fields are lakes. 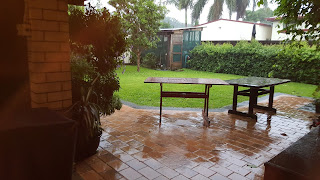 This was meant to be the first photo and does not look nearly as impressive - our backyard yesterday morning.  Jock hates going out in the rain and only goes when it is essential, picking his feet up and looking quite comical.
We have had over 400 ml rain in the last week, just over 600 since the beginning of the year.  Our total rainfall for last year was only 820 ml.  Hopefully this should mean that El Nino is nearly over.  The sad part is that only the coast is getting this rain.  Most of Queensland is still gripped by drought - the inland areas get their rain events coming across from Western Australia and that has not happened for over three years in some parts.
I planned to write this post a couple of days ago, but seem to have spent most of the weekend on the phone.  A cousin died in my home town of Goondiwindi and I really want to go back for the funeral.  That involves a 1,00 km flight to Brisbane, then I will be collected by my sister and we will drive the 220km west to Goondiwindi.  Just getting flights was the hardest part, but we will be so glad to go out to see so many friends and relatives, possibly for the last time for me.  I should have some interesting pics next week to show you.
Posted by Robin Mac at Sunday, March 06, 2016 4 comments: