Settling down after chaos

At last I can get near my computer for more than a few minutes so I have time to load a new post!
We arrived home last Tuesday afternoon, I was pretty tired, but the airline staff were wonderful and really helped me move round the airport and onto the plane.
Bill had told me as we were coming home that there would be a conference meeting in our office on Friday for 6 people for about 6 hours!  I was a bit devastated at first, but over the moon when I realised he had to clean up all the mess - every flat surface in our very large office had about two feet of stuff on top of it!  By Friday it was all empty - mind you, quite a bit had been transferred into my sewing room, but that has all come out again now.  There were a couple of trips to the dump and our bins were full.
I managed to go up and down the stairs numerous times carrying catering stuff upstairs, then I collapsed in a heap and read a book in between doing my exercises.  My knee is bending very much better and is not as painful.  I think I was a bit slack with the exercises in Buderim. 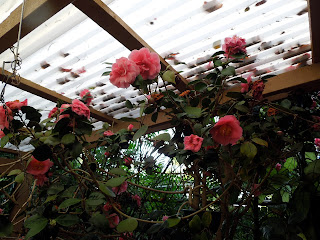 My sister has a beautiful garden - this camelia was almost finished, but still had some lovely flowers. 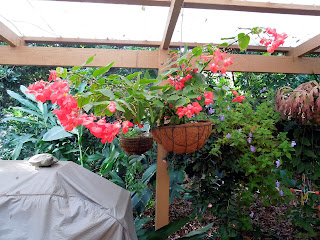 I am not sure which begonia this is, but it is making a really good display 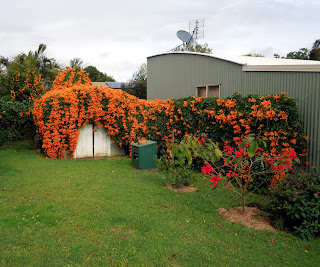 This old fashioned pyrostegia makes a spectacular display for a couple of months at this time of the year.  Barb's daughter disapproves as she says it is a weed, in fact she thinks most of the plants in Barb's garden are weeds!  They certainly make lovely eye candy though.

We had one really magnificent day while I was down there so we went for a drive to Alexandra Headland to take some photos.  I was even able to get out and walk a bit as  the surface was very even and not very sloped.  If you double click on the photos they should enlarge. 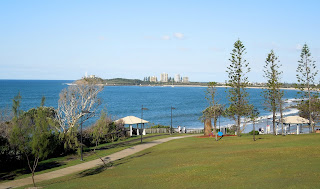 I wish I could get a photo on the brown honeyeaters which are filling our garden here with lovely - and very loud song all day.  They are only little and very nondescript, but they are very welcome with their cheery song.  They move so fast I haven't a hope of focussing to take a photo.
Posted by Robin Mac at Sunday, July 28, 2013 4 comments:

Getting better - and getting bored!

Well, I am out of hospital and on the road to recovery.  The surgery went well, though I haven'g got the amount of bend I had by this time after the other knee.  My surgeon is happy though so that is all I need to know.  I just have to keep on with the boring - and painful - exercises.

Bill came down for a few days to look after the two invalids, Barb is making a good recovery as well and has at last got an appetite back.  She hasn't felt like eating much for nearly two years now, so she is thrilled to be enjoying her meals at last!

We puddle around for a bit and manage to do the washing, then collapse into chairs with a rug over our feet - two old grannies together!  The weather has been miserable for most of the time, overcast and showery, but not a lot of useful rain.  We were having much better weather in Mackay.

I have managed to take a few photos of some of the lovely plants in Barb's garden, but they will have to wait till I can download them at home.  There are no stairs in this house for me  to practise on so I am hoping I can make it up the stairs to the office next Tuesday night, when I can start catching up.  Cheers
Posted by Robin Mac at Tuesday, July 16, 2013 5 comments: