Some gardening and some stitching

Yesterday I spent several hours at the botanic Gardens attending a fascinating workshop learning lots about propagating from cuttings.  Now I just have to put it into practice. starting later today!  I took these4 photos of some of the gingers which are flowering at present. 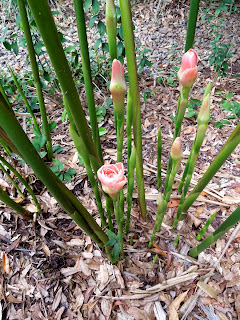 This is a Chinese tulip ginger, with a closeup below. 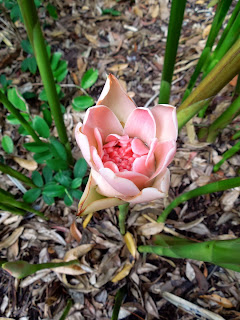 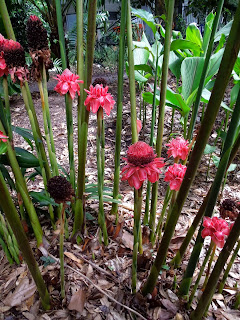 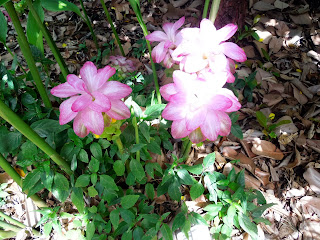 The curcumas in the Shade garden are flowering now.  Mine is a different variety and it won't flower till January. 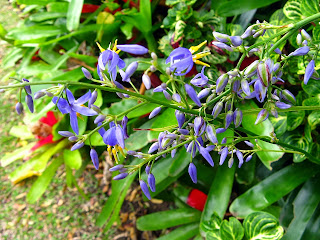 I showed this picture of a dianella in my garden last year, but missed the beautiful berries which follow.  They are edible, but I don't find they have much taste, and they are lovely just to look at. 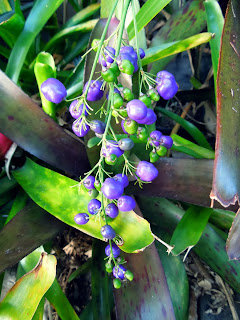 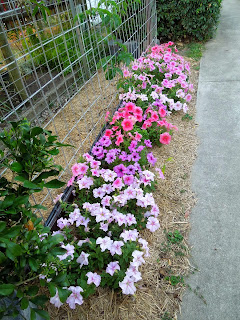 Bill has finally had time to rebuild the trellis which fell down (after 43 years!) and we have planted a new creeper.  While it is growing I have put in some petunias in front and they are giving us a great display at present.
Fortunately I have someone coming to water our garden while we are away, so I shall come home to plenty of flowers still, I hope. 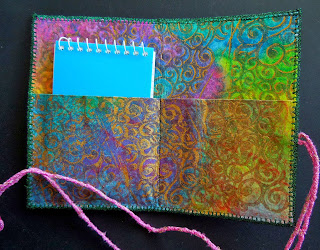 There hasn't been much stitching going on around here, but I had fun playing with the inktense blocks I recently bought from Dale.  Blogger has posted the photos in the wrong order, but you can see them all.  I needed a little notebook holder to take away with me.  I put down a layer of colour on evalon which I had first sprayed with water.  I let it dry and then did rubbings over a stamp with dry blocks.  I stamped over the top with the same stamp and gold paint.  I rather like the finished result, though the colours are not true to life in these photos. 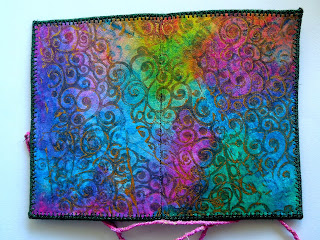 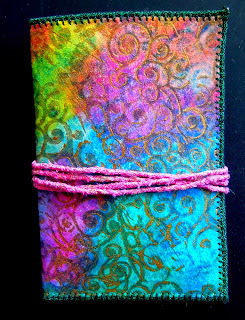 I probably will not be posting again till we return, then I will have so many photos I will not know where to start.  We will have a week exploring in the South Island, before attending a Walking Guides of Botanic Gardens conference in Christchurch, then another week in the North Island to catch up with family again.  I am hoping the weather improves before we arrive - definitely still what we would call winter at present!
Posted by Robin Mac at Sunday, October 13, 2013 8 comments:

Time has got away again!

The days are flashing by at present - less than two weeks to go before we are off on a trip to New Zealand for three lovely weeks.  There is something about holidays and my husband - he is now sporting a moon boot, having torn his Achilles tendon climbing down from a very high trestle - he still thinks it is okay to get up on the roof and prune vines etc.  At least it is his left leg so does not affect his driving.  Walking in national parks may be a different story however! 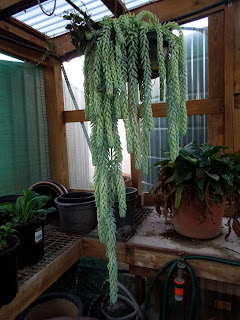 About a year ago I showed you this photo of my donkey's tail sedum.  I had no idea it flowers - I have had it for about 15 years. 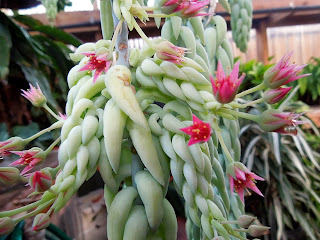 Look what has come out in the last few days.  They are only tiny and of course are all at the back of the basket to make them difficult to photograph, but they are so pretty and delicate. 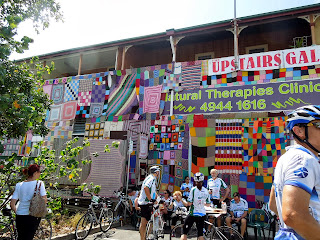 Today I spent many hours with the Botanic Gardens Friends manning a stall at an Eco-Festival run by the Council - who own our Botanic Gardens.  The festival was combined with another event and included the River to Reef bike ride.  I was really trying to take photos of the building in the background which has been 'wrapped' in knitted patches for the weekend.  Later they will all be taken down and made into lap quilts to donate to a local charity.  They certainly brighten up the building, a very old warehouse, now turned into an art natural therapies centre. 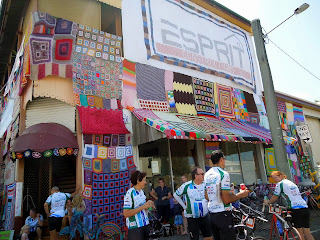 I wish I had arrived a few minutes earlier when one of the legs of the bike race finished.  One of our Garden Friends and his wife had competed on a Penny Farthing bicycle.  I think they did the 30 km run, I would love to have seen that. 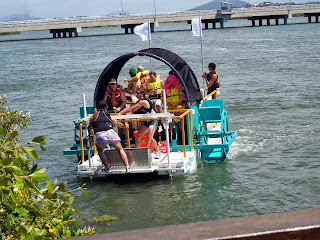 This is one of the home built rafts taking part in the river race.  They were frantically trying to steer the raft in close to the river bank without actually ramming it.  I think there were about 8 home made craft in the  event, but they were so spaced out I couldn't wait for the rest to arrive.  The finale is a great water and flour bombing event - and you don't want to be too close as a spectator either!  The sun was out, the day was hot and they were all enjoying themselves.