Last Friday was the tenth anniversary of the day our Botanic Gardens was officially opened.  There was  a celebration which included the official launch of a wonderful children's book - The Bungy Jumping Caterpillar. 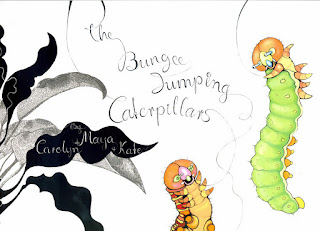 Three of our very talented Friends wrote, illustrated and produced this book, a story featuring four plants which grow in the Botanic Gardens and which are considered to be 'threatened species' in the wild. 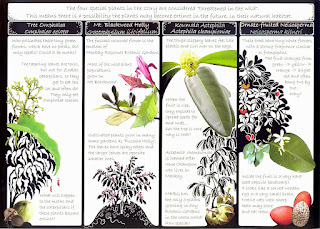 Do click on all these images to see them enlarged.  Kate has done a lovely job with the illustrations, a combination of photoshopped photographs and paintings. 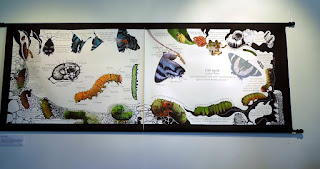 There is an exhibition in the gallery with photos of the caterpillars and the Zodiak day flying moth, which triggered this project.  There are three Omphalia trees growing beside the carpark, which the caterpillars denude of foliage on a regular basis.  The gardeners and Maya, one of the authors of the book, wage a permanent battle.  They want to spray to kill the caterpillars, and she want them left for her educational talks with visiting school children!!  Mostly Maya wins. 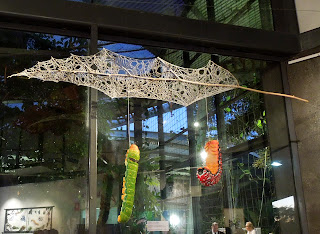 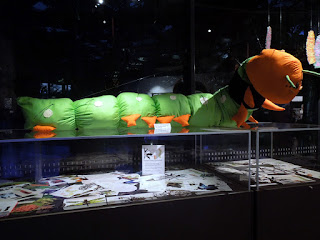 Carolyn, another of the authors, made this gorgeous caterpillar for the exhibition. 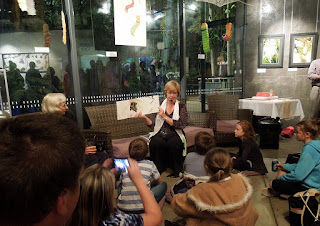 Maya reading the story to the children on Friday night, and you can see the adult audience reflected in the glass!
There was a really good crowd there to celebrate and reminisce on how far the Gardens have come in ten years - now we have to work on the next ten years!

I have more immediate things to concentrate on however - I have finally got a date for my second knee replacement - 4 July.  It seems so very close and I need to do so many things here before I fly off to Buderim.  My surgeon has moved down there, and as my sister lives in Buderim, I have decided to go there rather than try someone else.  I just hope I recover as quickly as I did the last time, but I imagine I shall be away from home for nearly a month, leaving Bill to fend for himself for most of that time....now I just have to fill the freezer!
Posted by Robin Mac at Sunday, May 26, 2013 4 comments:

A lovely card and a day out

I admired a card which Suz had made and here it is - she gave it to me! 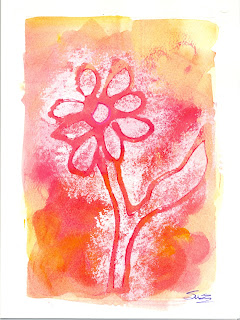 It is so pretty and I will keep it for something special. 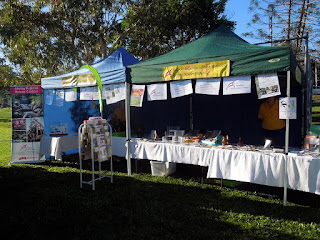 Today I spent most of the day with the botanic Gardens Friends setting up and manning a stall at the annual Farleigh School Palm Fete.  The day was perfect - cool morning, clear skies and a light breeze.  The school does a fantastic job - there are only 31 students there now, but the committee organizes this huge event, which has over 100 stalls, mostly selling all kinds of plants, but also some craft stalls as well.  I resisted the temptation to buy more bromeliads to bring home to my garden - now I am a bit sorry! 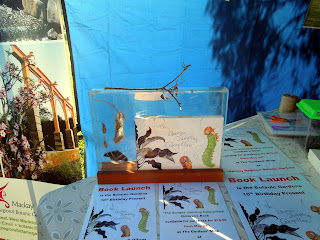 Our stall, as well as having lots of books and pamphlets with information, was promoting this exciting children's book which will be launched next Friday.  Three of the Gardens friends have written and illustrated it, showcasing three endangered trees which are growing in the Gardens.  I will show you more photos after next Friday night, but we are all very excited.

Apart from this, I have done very little of interest - just boring paperwork for the office - oh, a bit of gardening on the side when the weather has been too nice to stay indoors.
Posted by Robin Mac at Sunday, May 19, 2013 6 comments:

It is 50 years since Bill graduated as a chemical engineer and we have just come back from a wonderful reunion in Brisbane.  About 80 engineers from all the different schools of engineering plus a lot of wives attended - starting with a tour of the engineering labs at University of Queensland for the men and a look at an art exhibition for the women.  I hadn't been back to visit the University since 1960 and it has grown so huge, I couldn't remember what was there back then. 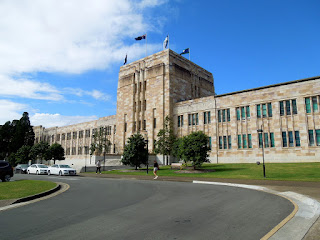 This is the front of the lovely sandstone building, which now has been extended to a massive circle 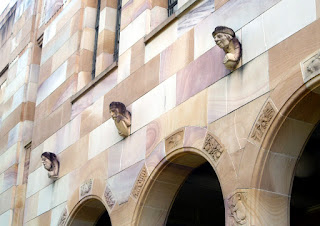 I love these gargoyles which have been carved by a lady who was at primary school with Bill.  I think there are about 200 of them around the uni now. 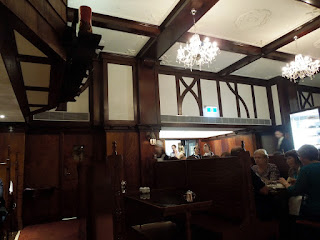 Still taking a trip down memory lane, we visited the City Hall which has recently reopened after being closed for two years for restoration and renovation.  As part of the renovation The Shingle Inn was installed and opened.  This was an iconic cafe in another part of the CBD which had been closed sometime in the seventies as the site had been sold for redevelopment.  The owners had the whole interior removed piece by piece and they have now recreated it inside City Hall. 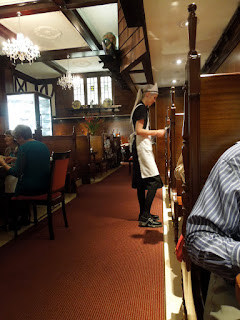 The waitresses are even wearing similar uniforms to the ones they wore soon after the second world war ended - but they don't have a notebook and pencil for orders any more, it is all done on an electronic pad with a pointer! 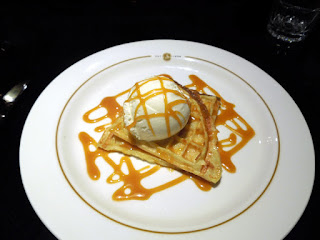 Our favourite order was always waffles and icecream and butterscotch sauce so of course Bill and I tried them out again - different shaped waffle, but the taste was just as good. 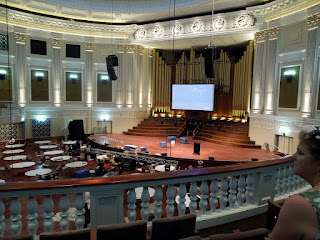 This is a photo of the concert hall which obviously can be used for lots of other functions as well.  When I was at College we used to go to symphony concerts there 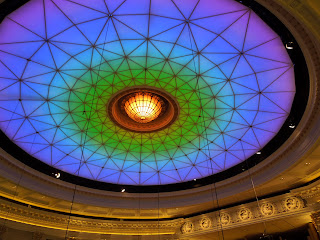 but this light was definitely not there then.  I can't decide whether it is okay or garish - changing coloured lights seem to be all the rage these days.  I assume it would be just the ordinary colour during a concert. 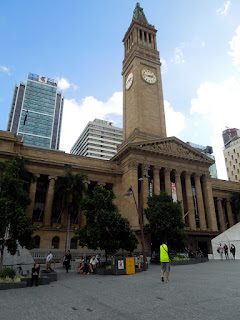 This is the best photo I could get of the outside of City Hall, there was a very ugly tent city in the square outside for some sort of an art exhibition.  Once upon a time ( when we were still students) this was a landmark which could be seen from all over the CBD. 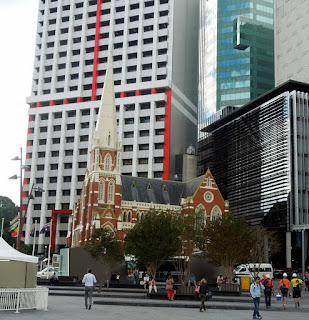 This beautiful methodist church was another landmark.  I often attended services there as a child when we visited family in Brisbane as my aunts were very loyal parishioners - I had never been in a church with an upstairs balcony before and I used to love it!  We children were always sent up there, I think to Sunday School, but that part failed to make any lasting impact - I have no idea of what we did. 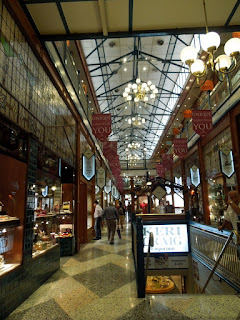 Walking back to where we were staying we went through the beautiful Brisbane Arcade, still with reasonably exclusive shops, but not as fashionable as it was in the thirties, forties and fifties.  I hope it is never demolished as the architecture is lovely. 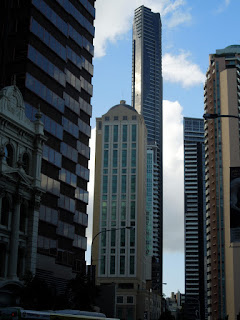 We stayed in the very tall tower you can see at the back of these buildings, but only on the 7th floor!  We had a very comfortable serviced apartment only 5 minutes walk from the dinner venue - that made us happy. 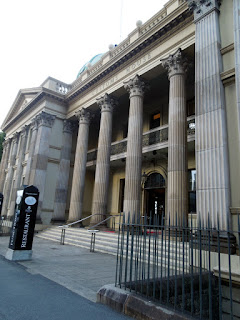 Here is the outside of the old Customs House, which the university has bought and uses for functions. 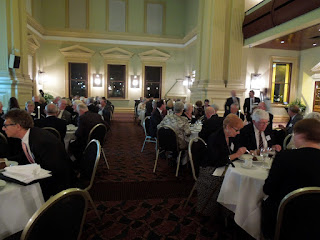 Very swish meal and lots of very happy people made for a night to remember. 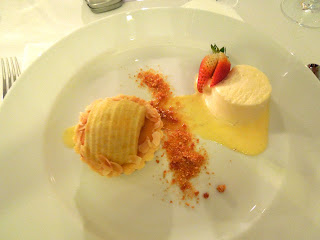 And I couldn't resist a last photo of one of the desserts - a scrumptious almond tart and vanilla baked custard - lovely, but I couldn't finish, too many good things all day!

Our Gardens Friends had a planting bee last Saturday which was fantastically successful - after having been postponed twice because of wet weather!  Our aim was to plant 1,000 lomandra plants during the morning in a new area of the Gardens - all done and more by smoko time.
The photos have loaded in the wrong order - too hard to change! 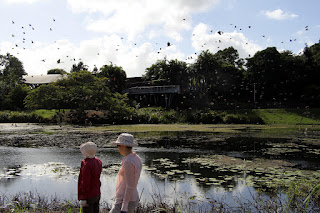 In the middle of the morning, the birds arrived! 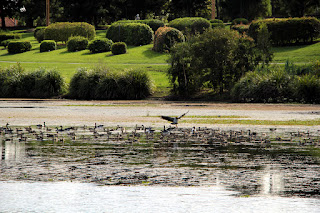 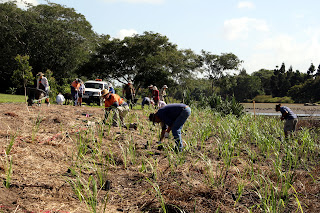 The team hard at the planting 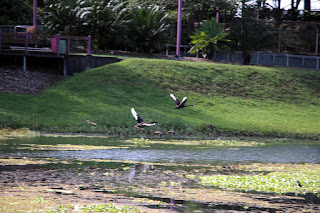 This pair of black swans led the flotilla.
The weather was perfect and it was a joy to be out in the open air.
Posted by Robin Mac at Monday, May 06, 2013 4 comments: