A very quick post today.  I have finally finished a little picture I made as part of the exercises in Lynda Monk's latest book. 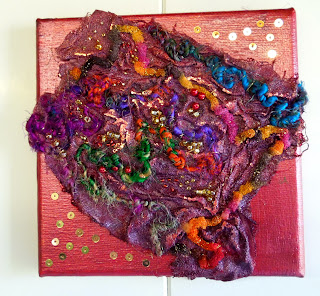 Sorry, it looks as if it is hanging crookedly, but I was trying to avoid the glare by taking it at an angle.
The box frame was painted with several layers of paint, some wiped immediately, but ending up an interesting colour - which of course is not showing up as a true colour here!
I attached some scrim to a piece of tyvek, then ironed it to make the scrim scrunch up.  Next I painted and sprayed the scrim with all sorts of paint and spray, not altogether happy with the result, but I have added so much thread and beads you don't see too much of the scrim anyway.

Hot and sticky weather here today, but I am so glad I am not in the northern hemisphere, I could not cope with all that snow.  Hopefully soon we will all have the weather we want.

I couldn't resist the temptation finally to purchase a gelli plate from Dale at The Thread Studio, and I have been having some fun with printing. I think you will need to click to make the images larger to see the patterns properly.  The lovely sheen from the Opulence paints is not showing up very well in the photos either, but I have no time to take any more.  I have used various different fabrics - no paper. 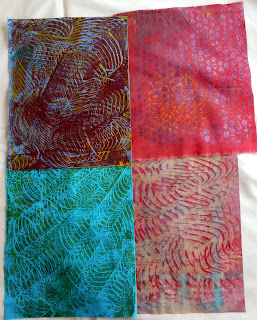 These pieces will go to make another little padfolio I think 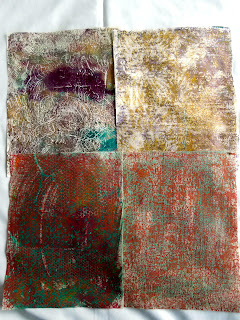 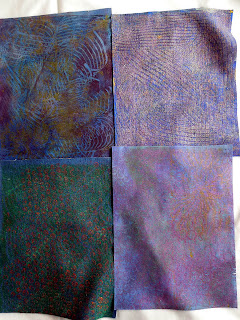 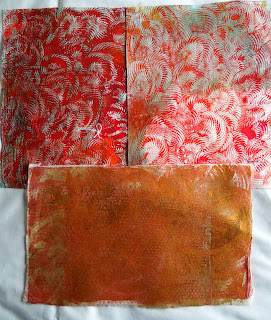 I can't separate the last three photos, but I made marks with different things, including a small cocktail whisk - I will be doing that again, I love the effect.
The two photos below are an exercise from Lynda Monk's latest book Exploring Creative Surfaces.  The photos are loaded the wrong way - the back of the piece is first.  I actually like it better than the front, I think. 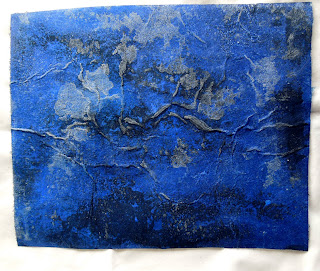 This was an exercise using Lutradur and bondaweb and foils, then zapping, more good fun. 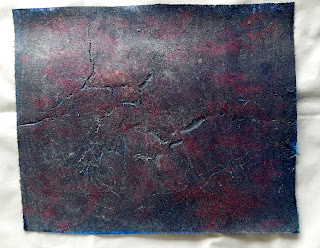 I will probably not get to work on these pieces for a few weeks now.  The rest of this week is filled with appointments - they are the bane of my life these days.  then we (hopefully)  have a planting bee at the Botanic Gardens on Saturday, provided the weather co-operates.  There is an ex-cyclone, now a low, hanging around off the coast trying to make up its mind what it is going to do.  So far we have had a day of gale force winds, then today has been very cool and drizzly - only about 10 ml rain, but very wetting.

I am going to Buderim next Tuesday to look after my sister who has just had a very successful shoulder replacement.  She has had a bad time for the last two years with a fracture which had not healed properly so we are thrilled she now has two shoulders the same height.  I am fascinated that the shoulder has been put in backwards.  Apparently she will have better movement of the shoulder because of this.  Because she can walk around without any pain, we will still be able to go out for walks etc, so will enjoy ourselves.

Then and Now event

We are not happy - again.  Our internet was down from early Friday night till this morning.  At least this time the phone line did not vanish and Bill was able to ring our provided late on Friday night only to discover that the problem was in the Telstra exchange - in fact lots of Telstra exchanges.....grrrr.  He has now filed another complaint with the company but I don't imagine anything will come of it.

Yesterday we had a very successful Friends event at the Botanic Gardens - a walk and talk 'Then and Now'.  The weather behaved and the rain held off till we were all under cover enjoying a BBQ. 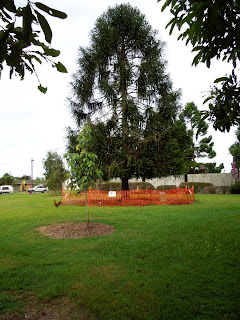 While I was listening to the commentary, I took the opportunity to take a few snaps of other things,  This huge Bunya pine has a barricade around the base till the last two nuts have dropped.  The picture (in the wrong place) shows a couple of nuts which dropped two years ago, the ones this year are much bigger and will continue to get bigger as the tree matures.  They weigh over two kilos and fall from a great height so would do a pile of damage if you happened to be underneath. 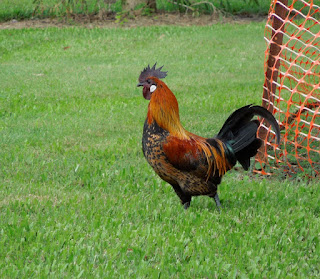 This magnificent rooster has taken up residence in the Gardens - he has been there since just after Christmas, not hurting anyone, very friendly till he looks like being caught then he is off like greased lightning!  We assume he was dumped, but maybe he just escaped to a better place. 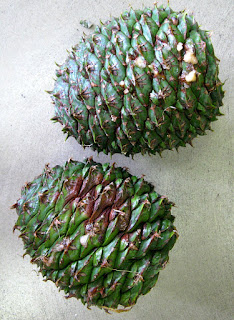 Bunya nuts which are immature. 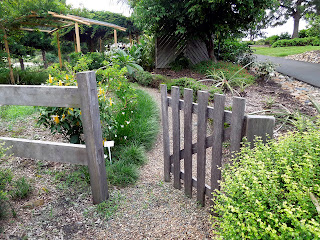 I love this little gate leading to a gravel path leading nowhere in the Heritage Garden.  It represents a gate to the garden of Rawson's Hollow, which belonged to the Finch Hatton family, one of Mackay's pioneers. 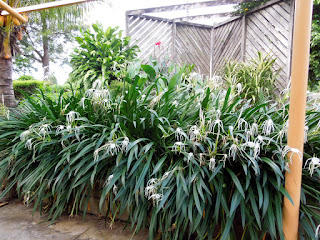 These crinum lilies are flowering in front of a representation of the fernery at Rawson's Hollow.  They are flowering all over Mackay at present, they are one of the most popular species for street planting and are looking marvellous.
Today was a glorious sunny day, just the sort to make you feel really glad to be alive.  One cyclone has formed and then gone heading off to the east of us thank goodness, but there is the threat of another forming in the Gulf of Carpentaria later this week, which could make life interesting.
Posted by Robin Mac at Sunday, March 10, 2013 6 comments:

More 'Then and Now' photos

Finally I have been walking in the Botanic Gardens with my camera so I thought I would show another couple of photos of contrasts. 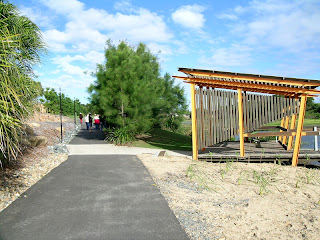 and this is the same spot with the camera angled slightly more to the left a couple of days ago. 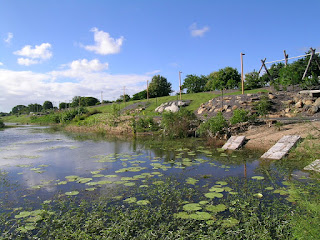 I had walked through the shelter and out onto a boardwalk to take this photo, again in March 2006 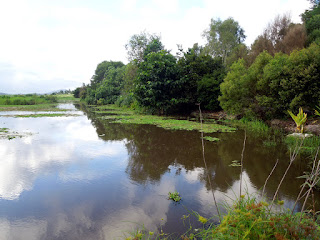 This is taken from almost exactly  the same spot this week.  The water level in the lagoon is much higher after all the rain we have had.  I actually couldn't walk any further out on the boardwalk - my foot was almost in the water covering it!
What was originally a very hot part of the Gardens is now a very relaxing shady walking area.  Just at the moment the lagoon is relatively clear of weed, but the hot, humid weather will make it grow rapidly.  I wish we could get the people upstream of the Gardens to clean out their part of the lagoon - we clean up ours, but every time there is a flush of water, the weeds all appear again.
I have not been walking much for quite a while, I just couldn't cope when we had the very hot, very humid weather, and since then we have had many days with heavy showers when i want to walk.  I know I am a squib, but light rain is one thing, heavy rain is quite another - and I only have one comfortable pair of sneakers which I need to wear all the time.  that is my excuse anyway.  I also have a sook of a dog who hates getting his feet wet.  He is so funny to watch when he needs to go over the wet grass, he almost goose steps.  Just as well he ended up with us and not with a farmer who wanted a working dog!