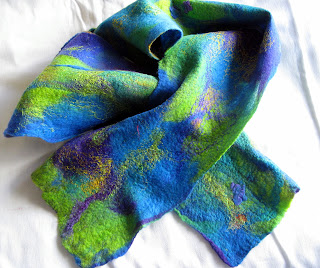 Not a lot I can show you today.  I have been doing a few other things, but they are winging their way overseas at present, so later.....This is a scarf I felted for my grand daughter in Canberra - her choice of colours.  I am still a novice at getting the measurements right, but practice makes perfect they say!
We had a very pleasant Easter - seems a long time ago now.  The weather was simply magic.  After all the rain we have had over the past few months, this was the first Easter I can remember when there was NO RAIN during the four days!  The fifth day (a holiday here in Oz) spoilt the spell a bit, but mostly at night so didn't worry us.
Our son Stuart from Canberra has been visiting his daughter so they were both staying here, keeping us on our toes.  Hannah is learning the flute at school and I really wanted a photo of her playing - she is not very good yet, but at least the noises are pleasant to listen to, not like a violin.  HOwever the only photo I managed to get was the one below, just before we left for the airport for Stuart to fly home - to weather very different from ours. 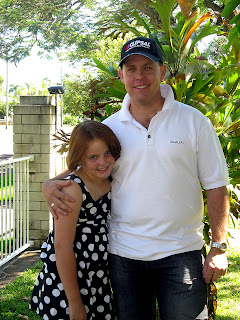 Next week will be busy as well because the annual Sugar technologists' conference will be in town.  Jock will have a holiday at the dog kennels so bill can concentrate on running the conference - for the very last time.  That is cause for real celebration.  He has finally found someone else to take over the role of secretary, so he will be able to sit back and enjoy the conference next year with no responsibility - and he will have a lot more spare time for his other work during the year.
Hannah and I watched the wedding last night, while Bill and Stuart were cross the football telecast was delayed!  The dress was so beautifully elegant, and she looked simply stunning.
Posted by Robin Mac at Saturday, April 30, 2011 4 comments:

Another walk in the Gardens Late yesterday afternoon Jock and I went walking in the Botanic Gardens.  the reflections were lovely. 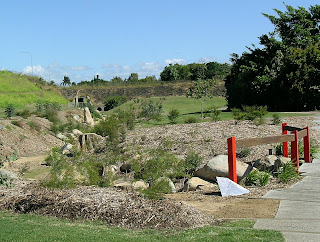 This is a photo of what the drain now called the Brigalow belt garden looked like just after planting seven years ago.  The plants all came from the dry hinterland behind the coastal ranges just west of Mackay.  Their natural habitat is in and around creek beds which are dry for most of the time, but have raging torrents rushing down after heavy rain.  the annual average rainfall in that area is about 23 inches as compared with our average of about 65 inches. 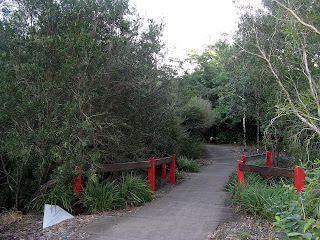 Amazingly, the area has thrived as you can see from this photo taken yesterday.  So far no brigalow trees have been planted, I personally doubt that they would survive the wet, but perhaps we should experiment - hat is what Botanic Gardens are for after all.  Brigalow trees are an Australian native which grows in huge tracts (or used to) in Eastern Australia, particularly in Queensland.  When the trees are felled, the land becomes very good grazing and cropping land, so is highly prized.  So many areas have been cleared that there are now tight restrictions on clearing any trees at all. 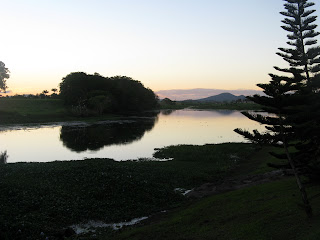 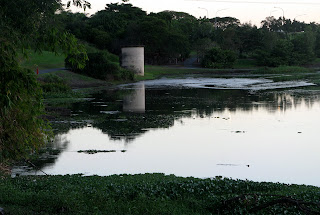 This is looking the other way, and showing the old water tower from the other side than is shown on my header.  There must have been a couple of hundred people walking in the Gardens late yesterday as the weather was so good.  Fingers crossed it holds till Tuesday.  Anzac Day on Monday is likely to be either wet or very hot!
Posted by Robin Mac at Saturday, April 23, 2011 5 comments:

A bit of gardening 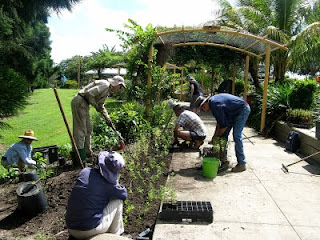 Everyone very busy planting at the Botanic Gardens this morning - at last it is dry enough to get into garden beds!  I think everyone was so thrilled to have some fine weather we had a wonderful rollup to help put about 800 small plants in the ground!  As usual I provided smoko - and as usual - I was welcomed warmly when I arrived with the trolleys! 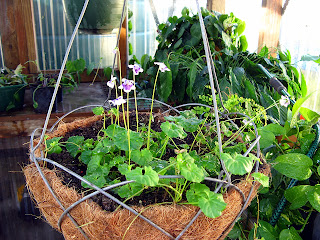 This will look better if you enlarge it - I have finally got the native violets again after losing my clump a couple of years ago.  They are such pretty little flowers aand make a wonderful ground cover in semi-shady areas.  I am not sure how long I will be able to keep them in a hanging basket though. 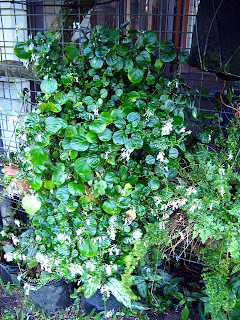 For some reason this plant is known as Swedish Ivy, but it is really plectranthus Australis - so no connection with Sweden and it is not an ivy.  It is so hardy, I have had this for about 30 years at least now, it gets almost no attention and has only been repotted a couple of times - I don't know why it keeps rewarding me with lovely glossy green foliage and occasional bursts of flowers! 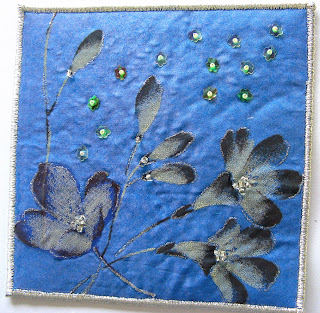 This is the April page I made for Angela in England, but it had to travek by a very roundabout route as I stupidly sent it to the wrong person by mistake!.  Angela at last received it this week.  Her theme is flowers.
We apparently had an earth tremor measuring 5.4 on the Richter scale about 3.30 pm, with the epicentre only a couple of hundred kilometres north of here - I didn't feel anything and Bill was just waking up after a nap (he needed it after working hard this morning).  Nikki said the cupboards all shook at their house in Walkerston.  I think I was burrowing into the bottom of our chest freezer looking for a particular bundle of meat about then so I probably thought any shaking was just to do with that!  However I see that Christchurch has had another aftershock - they don't need that at all.
Time to get ready for our barbecue dinner - have to make the most of the fine weather, we are sure to get some more rain soon.
Posted by Robin Mac at Saturday, April 16, 2011 4 comments:

And the sun shall shine! 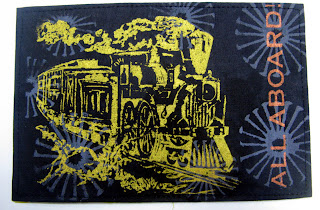 This picture is of the second postcard I received for the Age of Enlightenment swap - it is from Vicki Welsh, celebrating the first Transcontinental Railroad - surely a major achievement back then.
The rain has stopped and the sun has shone for three whole days now - gorgeous Autumn weather, still hot in the middle of the day, but you can feel the nights getting much cooler - yippee.  I have even had to water some of my pot plants!  We really shouldn't be complaining aboutthe amount of rainfall we had here in the city - just on 900 mm for March.  Some of the places about 20km north of town had 1600mm - that is 64 inches in the old scale - and that was just in one month, after they have been having heavy rain for months!!! 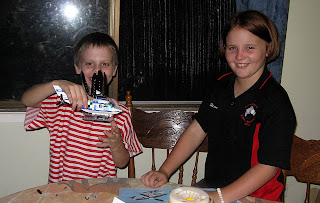 Alexander turned 8 yesterday, but he had his party on Saturday.  The rain held off all day, Dougal was able to mow the lawn for the kids to run around, then he cooked a BBQ for the family afterwards, and the rain started just as we sat down to eat - brilliant. 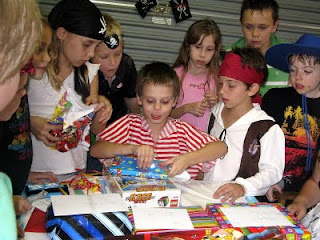 Present opening is very important!
Nothing much creative has been happening here.  We now have a new cordless phone after plenty of drama, but the store was very helpful.  We bought a panasonic model a bit over two years ago, thankfully taking out an extended warranty.  One year and one month later it gave up the ghost.  That time the store simply replaced it - we took out an extended warranty again.  Guess what - one year and one month later this one stopped working also - we couldn't believe it.  Back to the store to find the policy had changed - it had to be sent away to repair.  However today we had a call to say we were being issued with a store credit as the phone could not be repaired and that model was no longer available - thank goodness, I didn't want another one like that anyway.  This one, a Telstra phone, is silver so I should be able to see the numerals much more easily.  I detest the way everything is black on black these days, almost impossible for older people to see, even without my handicap.  Tomorrow will be the test, the two phones are charging now.  I missed my cordless phone so much for the week without it, I could cart it outside while gardening, or continue cooking, or all sorts of other things you can't do while attached to the wall!  Cheers.
Posted by Robin Mac at Tuesday, April 12, 2011 5 comments: 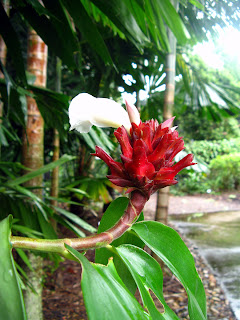 The rain continues, but there are some beautiful flowering gingers in the Gardens.  This native Crepe Ginger is very unco-operative, the white flower is facing the wrong way and I couldn't get a better photo. 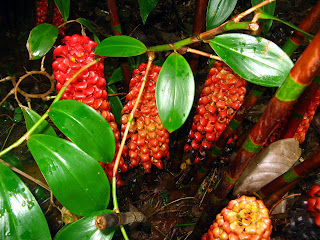 This is another native with a very complicated Latin name, but commonly called Back Scratcher ginger. 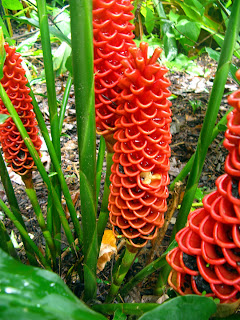 This orange Beehive Ginger is exotic, but gorgeous. 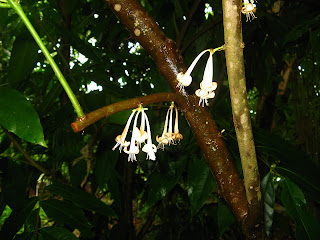 I love the way the flowers of this native Daphne grow straight out of the trunk of the tree - they smell beautiful too. 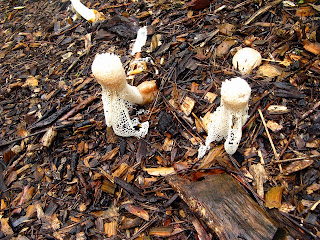 The wet weather has brought out all the fungi, including this lace fungi with its pretty skirt. 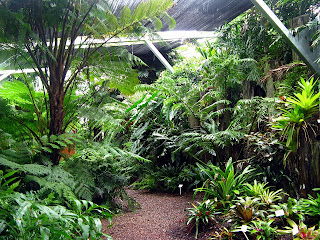 The fernery is looking very lush - at least the weather is good for some things.
It seems awful to be complaining about rain after all the droughts, but sometimes there is too much of a good thing!
Posted by Robin Mac at Monday, April 04, 2011 4 comments: