Yes, I know I said I would be back soon with some photos, but life got in the way! I am so glad I was able to go out to Goondiwindi for my cousin's funeral.  We saw friends we had not seen for over 50 years, which is what happens at events like that.  While it was wonderful to catch up with so many, it was a bit disconcerting to find that suddenly (?) all the fellows we went ot dances and parties with were in their eighties!!!  I had not grown a day older of course. 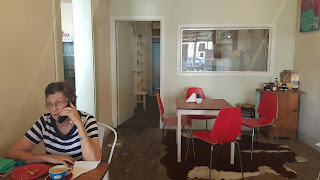 Barb and I had breakfast in what used to be our father's and Grandfather's solicitors' office - now turned into a very popular coffee shop. 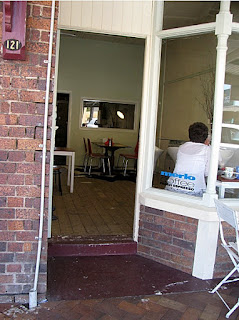 The owner was asking us all sorts of questions about the building, and I started wondering myself about all the questions I should have asked before my father died - we have no idea when the building was erected, some time in the 1920s we think, but that would have been pretty amazing for a brick building.  The soil is heavy, gluepot black soil which moves a lot in wet or dry weather. 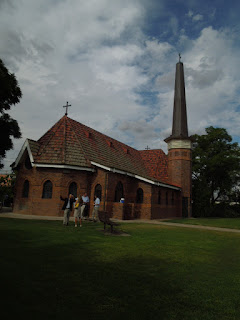 This lovely church where the funeral was held was built in the late 1930s and was considered a remarkable building back then as it was constructed on a 'floating' concrete base to prevent cracks from developing!  I am not really very knowledgable about the process, I am only quoting what I was always told.

Since then, I have been to Buderim to look after my sister after her knee replacement.  That was a lovely break, she is recovering well, though not nearly as fast as she would like.  We had a wonderful time reminiscing - and realising how much we have forgotten - and now there is no one left to ask.

I was pleased to prove to myself that I can still travel independently with not much difficulty.  I flew down and back from Brisbane twice with different airlines, and caught the bus to Buderim.  Airports are horrible places at the best of times, but  the staff were all very helpful when I needed it.
In my previous post I was talking about the soggy, soggy weather, but that was almost the last of the rain.  The pattern this year has been most peculiar.  We have had a lot of rain in total, but in about three events - and hot, dry, windy days in between.  We could really do with some more decent rain again, the grass is browning off and becoming crackly again.

We have an interesting excursion next weekend with the Gardens Friends, but I am not making any promises this time to show photos as knowing what I am like, it may be a while.
Posted by Robin Mac at Sunday, April 10, 2016 1 comment: