I can't believe another year has flown by and the children's book week parade has come around again.  This year the theme was 'space' and there were some really creative costumes.  They are all supposed to relate to children's books, but many of them these days are from film and television 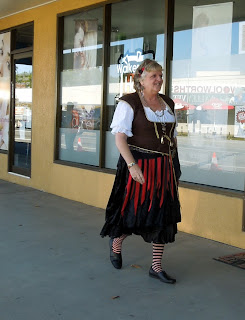 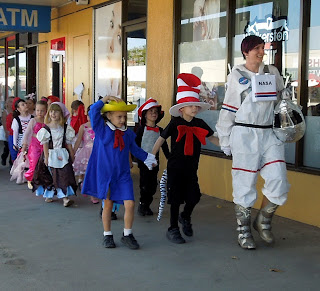 I can't separate the top two photos.  Bente is the librarian who has been organising this parade for many years, and it is getting bigger all the time.  The two primary schools in Walkerston participate, you can see how the children enjoy themselves.  Lots of the teacher dress up as well, just to add to the fun. 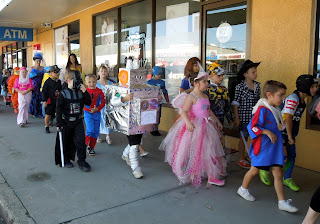 The child in the silver box won a prize, but I have no idea what the book was - I am very unfamiliar with children's books these days. 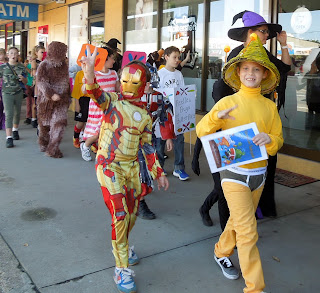 Our grandson Hamish, on the right, is an Alien who loves underpants - an absolutely brilliant children's book according to his mother. 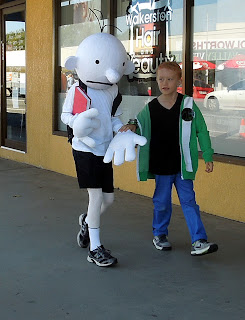 This boy needed a guide, he won a prize too. 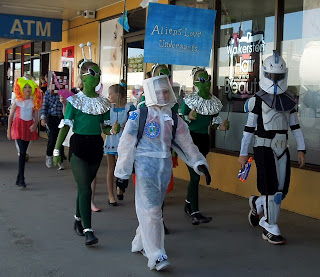 Alexander, in the centre is the Australian astronaut, Thomas ?  I am ashamed to say I have forgotten his name. You can see more aliens who love underpants behind them.  They won a prize, and would have had fun cleaning the paint off before classes resumed for the day. 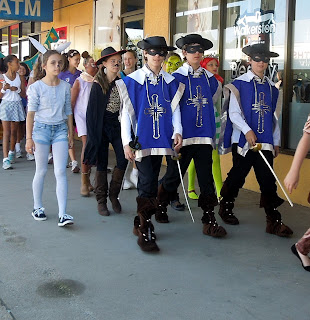 These three musketeers won a prize too, but I am not sure that their costumes were home made! 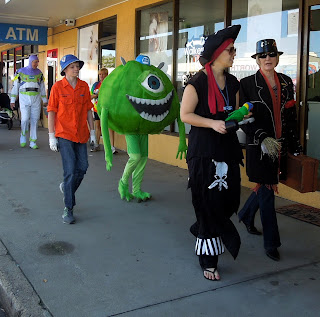 The green man from outer space also won a prize.

All in all, a fun day.  The weather was perfect and thank goodness there were no heavy transports driving  past as the parade was processing.  Unfortunately this area has become a major highway for heavy traffic to and from the mining are in the hinterland so the road can no longer be closed for the hour of the procession.
Posted by Robin Mac at Sunday, August 25, 2013 3 comments:

Well, blogger has completely defeated me.  After I had managed to log in with a new email and start a new blog, the next time I came back to look, my new blog was under my old email and I could only look, not enter - a few nasty words were said I am afraid.  I have tried all sorts of things over the last week, but have now admitted defeat and gone back to my old blog.  When I find some spare time I shall change the header for this one however. 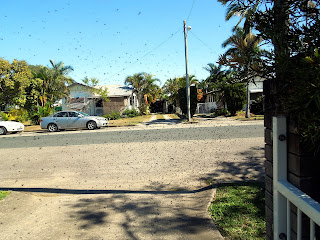 You will need to double click on this seemingly uninspiring photo to see the cloud of native bees swarming.  They are very small, about half the size of my little fingernail, and have no sting. 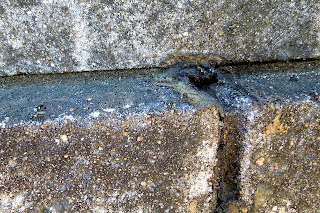 They are very hard to see here, but their nest is inside the gate post, there are several trying to push their way in through the crack in the mortar.  They have lived in this post for about 15 years now - the white bricks are very black with mould as we cannot put any bleach etc on the post  as we are afraid of hurting the bees.  Obviously we can't harvest the honey (that would mean destroying the post), but we love having them there.  They fertilise the garden as well as being a great source of interest for children.  They swarm like this on warm days. 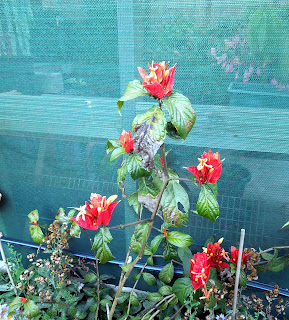 These are not wonderful photos, but my ruellia plant (sadly neglected) is flowering madly and I love it.  I hadn't realised before this that the proper flowers are the creamy centres.  This is the first year it has really flowered well, so perhaps that is why. 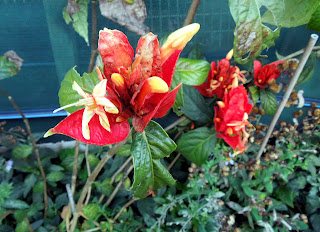 Hurrah, I am on the move

Hullo, this is just a quick post to say that I have finally moved my blog to Robin's Ramblings Two

I hope you will all come to visit me there.  Cheers
Posted by Robin Mac at Tuesday, August 13, 2013 No comments:

Time to move - and I am frustrated again!

We have had this elkhorn in the garden for well over 30 years, but unfortunately the tree died several years ago. 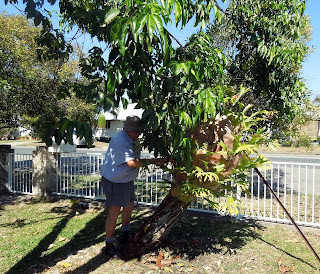 We have had the trunk propped up, but it was just about rotted through so Bill had to cut the elkhorn in half to remove it 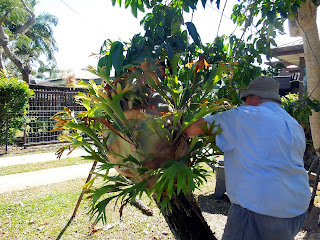 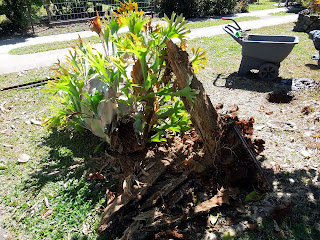 Here it is on the ground 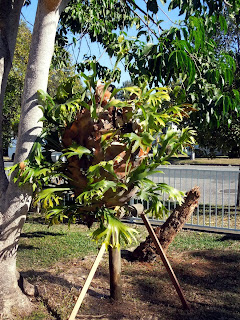 and here it is tied onto its new support - after much heaving and a few words said!  I was standing pushing and supporting for simply ages.  The props are only there till the ground hardens up around the base of the pole.  We thought the remaining base of the tree would simply push out of the ground but not a bit of it,  that is another day's project! 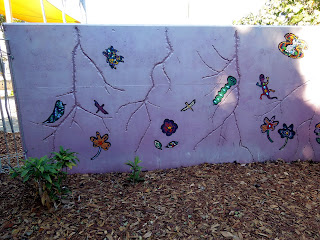 During the school holidays there were some workshops at the Botanic Gardens for school children to make ceramic tile pictures, which they loved.  These have now been inserted into the walls at the childrens PlayGarden. 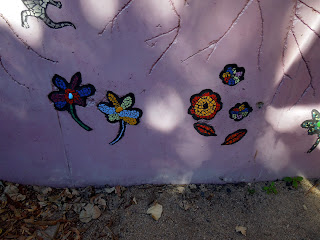 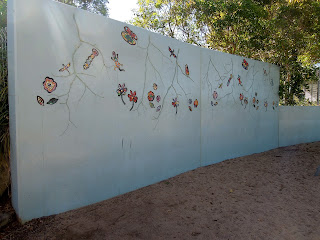 I am sure you will all agree they look pretty good.

I Have spent several frustrating hours trying to set up a new blog, signing in with a new email address so that I continue to have contact when my old email address expires.  I spent many fruitless hours trying to change that address with no success whatever.
I really hate what blogger has done to setting up a blog now, it just wants me to share and upload apps and do all sorts of crazy things I have no interest in.  I could not get past that to post a blog, so I came back here and will have to think about what I do next!
Posted by Robin Mac at Monday, August 12, 2013 3 comments:

I sat on a stool and waited a few minutes, then pointed the camera and kept shooting, hoping I had at least one of the brown honeyeater. 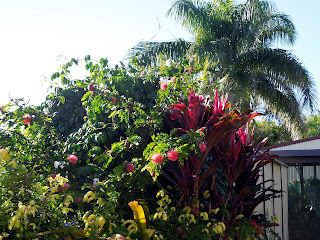 You will need to click to enlarge this photo to see the small bird in the centre top. 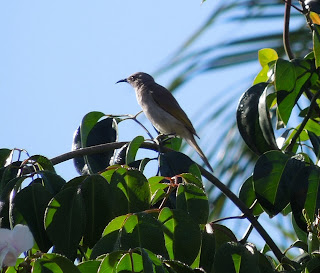 This is a closeup - a very insignificant looking bird, only about 10 cm long.  there are at least half a dozen singing away all day with very loud trilling calls.  They sound so cheerful 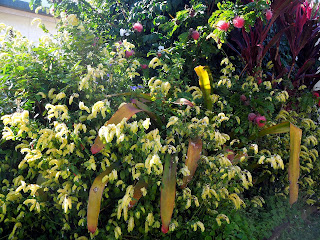 This is the very unkempt jungle of a garden bed which desperately needs cutting right back, but while the birds are loving it, I am leaving it completely alone.

I am still making slow progress - well, I think so anyway, though my physio says I am doing well.  I have spent a lot of time on the bed reading over the past few weeks.  I bought a Kindle just before I went away and I have very ambivalent feelings about it.  It is beautifully light and compact to carry, and I can read easily with my crummy eyesight but I do like the feeling of holding a book and being able to flick easily back and forth as you are reading.  I suspect if I knew a bit more about managing the Kindle, I could do that with it also, but so far I haven't learnt how.  There is one feature I am really in love with and that is the dictionary.  If I come across a word in the text I don't really understand, I simply press on that word and up pops a dictionary with the definition - clever.  I think when I am at home I am more likely to borrow books from the library, but when I travel I will certainly be loading up my Kindle to take with me.

Today is a beautiful spring day of glorious sunshine so I am off out into the garden for a while.  Hopefully soon I will have enough inspiration to get back into my sewing room.
Posted by Robin Mac at Sunday, August 04, 2013 5 comments: