When will summer end?

The summer season should be well and truly over by now, but i still have every door and window in the house wide open.  As well as that I am still in shorts and short sleeved Tee!
We had two quite cool nights, which inspired me to get out the winter pyjamas and my warm clothes (because they were in the same bag).  Of course the weather warmed up again immediately.  The weather bureau is now saying we may not get a winter, just some wet weeks as the pattern goes from el nino to la nina.

Wandering round the shopping centre is an interesting experience  - all the clothing stores are full of heavy winter jackets, some even having fake fur collars, and thick padded jackets - the sort I would wear in the south island of New Zealand (or Tasmania).  I can't imagine much of that stock will be sold here.  Of course these days the shops are all national franchises and the purchasing is determined in Melbourne (nearly 3,000 km south of us).  They do not seem to have any idea that we have  minimum temperatures higher than the maximum temperatures in the southern states most of the time.  I suppose this happens all round the world with corporate buying - not what I call progress! 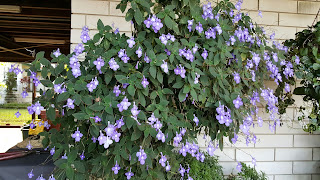 My Nodding Violets are still flowering magnificently  - much later than usual, they are such a cheerful sight to see out my kitchen window. 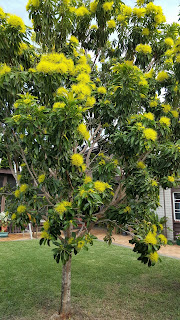 The Xanthostemon tree is also in full flower and is full of birds.  While I can't see any of them very clearly I always know which ones are in the tree - the rainbow lorikeets adore it and pick over every blossom.  If there is only one or two, the little brown honeyeaters will come into the tree as well, but any more lorikeets frightens them off.  We have also had spangled drongos performing acrobatics in and around the tree, so there is always plenty of activity to keep us amused.  The flying foxes come in at night, but the tree is far enough away from our bedroom so we do not hear the squabbling.  We love having flowering plants for the birds in the area. Since we lost our large rain tree many years ago we have not put feeders out, just water dishes and flowering plants.

There has not been very much to say, but I need to keep in touch occasionally just to let you know I am still here.  Now I shall take advantage of the weather to go out into the garden to do some potting whil it is still warm enough.

What a week - and now for the diet!

Every yea the Sugarcane Technologists hold a conference which we attend, and this year the conference was in Mackay.  Not having to travel is a very mixed blessing - the usual home chores somehow need to get done in between partying!

The  president's wife has to form a committee and organise entertainment for the partners of the delegates - which can be quite a shock, especially if the wife has never previously attended a conference as happened this year.  The comprised of four rookies and they could not have possible done a better job. 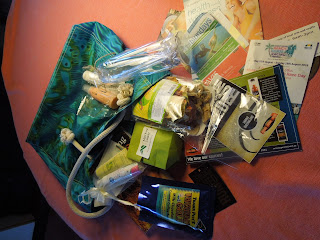 When we registered we were g iven a superb beach bag filled with all  these goodies! 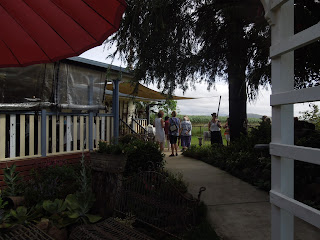 Next we were treated to a luscious morning tea at this charming cottage in the Pioneer Valley, run by a family with the only advertising a Facebook page and word of mouth - and you need to book to find a spare table!  That says it all. 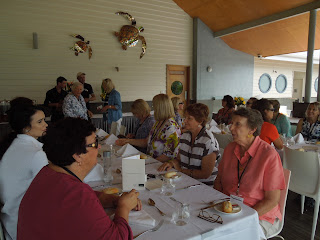 We were not done with eating - we had an hour's bus ride - and lots of chatter - to Airlie Beach where we had a wonderful sunch - I forgot to take any photos of the food! 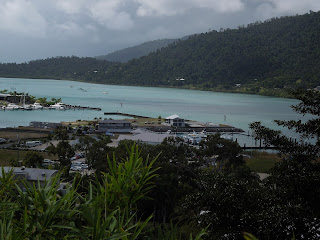 The day was not sunny so the sea was not blue, but this was the magnificent view from the restaurant.  Before we returned in the bus we were given an hour to shop in Airlie - several of us chatted over a coffe instead, but two hardy souls went on a 10 km run!!! 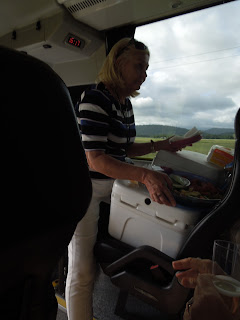 They undid all the healthy bit coming home in the bus.  The committee produced a large esky out of which came chilled champagne and canapes to be passed around - all highly illegal, they should have been strapped in their seats, but delicious just the same.

We went to a dinner that night, but I did not take any photos. 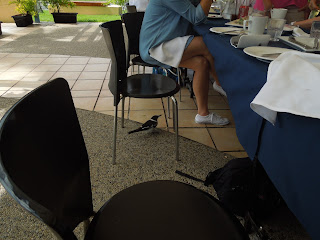 Thursday was another day of eating and talking!  A very pleasant morning tea beside the beach, which this cheeky young butcherbird wanted to share.  There were three more, but I was not quick enough with the camera. 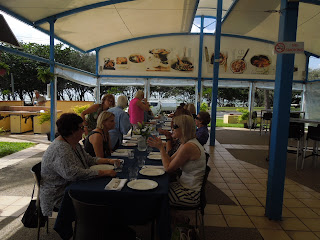 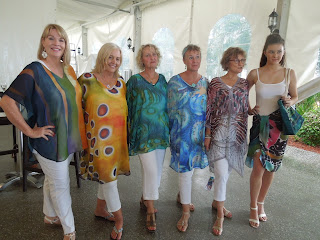 On to the next venue with more food after a fantastic fashion parade of garments designed by a local designer using the colours of the fish on the Great Barrier Reef.  The young girl on the right is carrying one of the beach bags we were all given.  The colours are just forgeous. 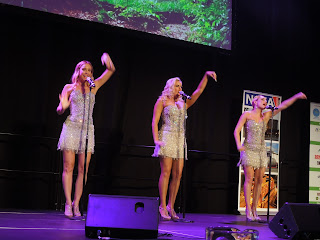 We did not need dinner that night, but it was t he Gala event of the week so of course we were there!  Part of the entertainment was these three gorgeous girls - a group called The Diamonds - legs up to their armpits and the most incredible and energetic choreography while they were singing.  One of the ladies at our table was watching the men (about 300) in the room - she said there was a collective dropping of jaws as the singers bounced onto the stage - and they all noticed the legs!

On Friday we visited The Sapphire House, no photos, but very interesting - pursed definitely in pockets however as the prices for the beautiful jewellery on display were definitely not for impulse buying! We learned a lot about the different colours of sapphires and how they are formed though. 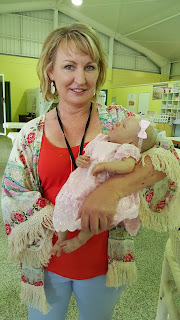 Next door to the Sapphire House was a Craft shop where we had morning tea which include some of the best scones I have ever tasted.
Juliette (above) is not holding a real baby, it is a doll, but feels just like picking up and cuddling the real thing!  Amazingly it only cost $200 and the maker takes workshops there.  Our committee were in stitches the day they were checking everything out - the blackboard outside advertised a class 'for making babies' They all had to have their photos taken beside that! 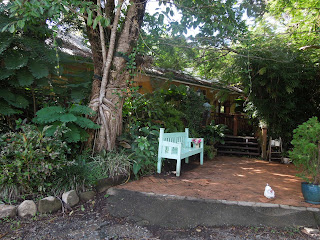 Our last port of call was the Old Railway Station Teahouse for woodfired pizzas for lunch.  The owners bought the Marian Railway Station when the line was closed about ten years ago, including the signage on the wall below. 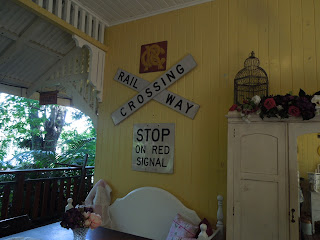 They added some verandahs and have planted a lush tropical garden for a really beautiful setting.  They host quite a few weddings there as well. 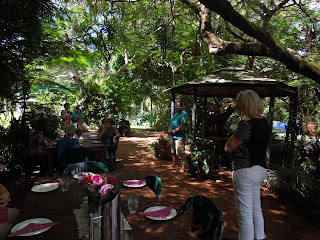 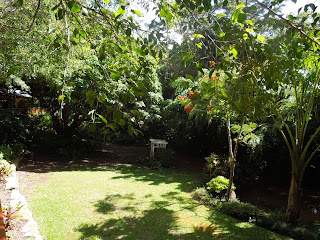 Sadly all good things come to an end and now we are almost back to normal, I have done all the washing and most of the ironing and am really watching what I eat!
Posted by Robin Mac at Sunday, May 01, 2016 3 comments: