I was all set to post nearly a week ago, but it was not to be.There were lots of distractions on Sunday, so I thought I would wait till Monday morning, when all would be well.....BUT.....we had an early morning doctor's visit, partly to assess Bill, who has been very poorly lately, lots of aches and pains, lethargy and general lack of the ability to do anything physical.  He ended up in hospital for three days - the quickest way to see the specialist!  Lots of tests later, he is at home again, actually feeling a bit better.  Of course, he had an enforced rest for that time, definitely not something which would happen at home.  There are still more tests to happen in the next week or so, but at least I am back to a normal (?) routine again. 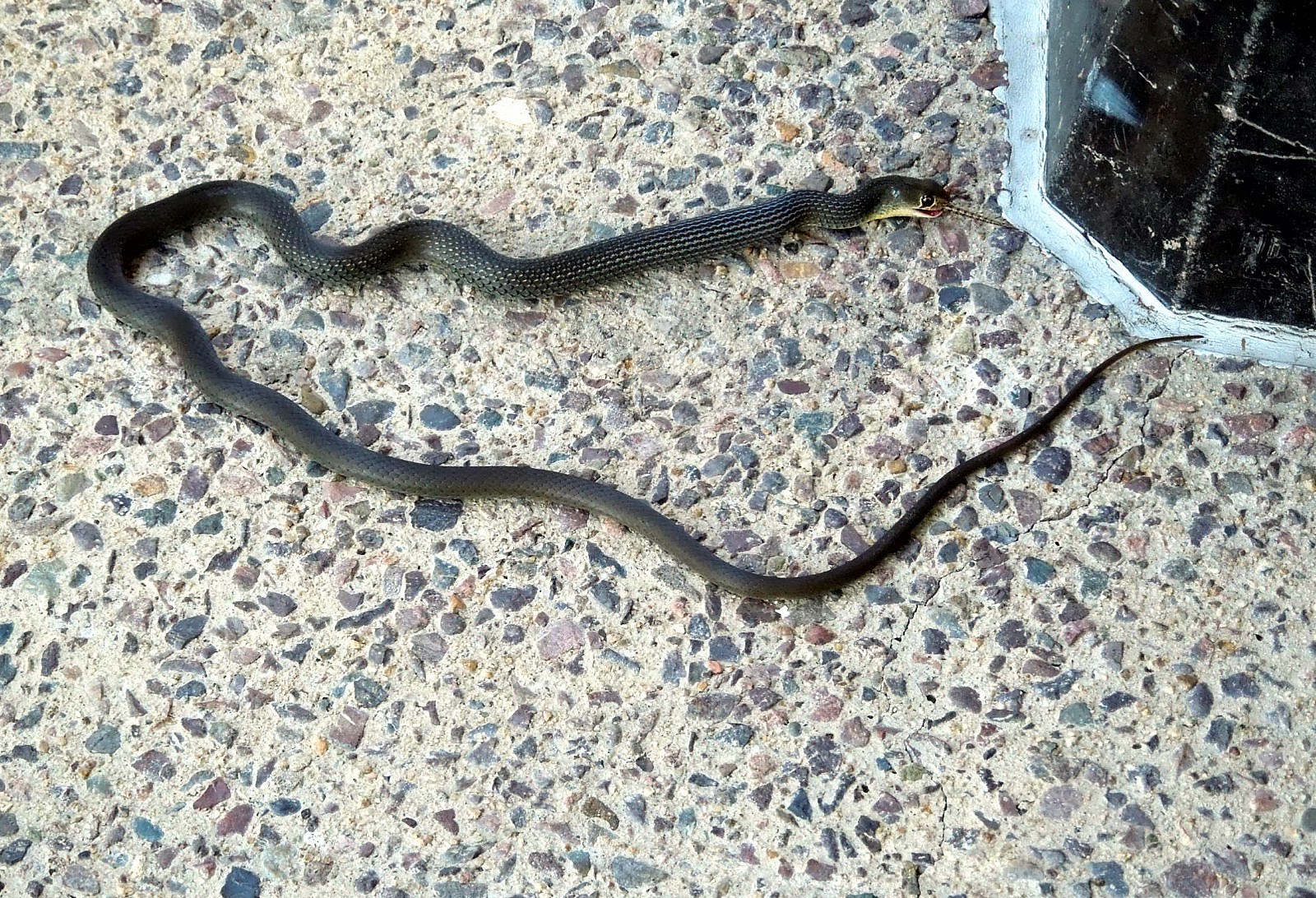 We had a Friends' function at the Gardens last weekend and I took this photo of a yellow eyed whip snake eating a lizard on the deck.  You will need to click to enlarge to see it properly.  Of course I didn't have my camera in my hand so I only got the last bit by the time I had fetched it.  The snake is supposedly poisonous, but they are very docile - we had quite a job to persuade it to remove itself to the nearly Cloud Garden.  I think it was enjoying digesting its food in the sun!
Then later on I took this photo, just with my little Nikon and no special filters - it has turned out quite well.  The smokestack at the local sugar refinery was smoking well and I was looking directly at the sun. 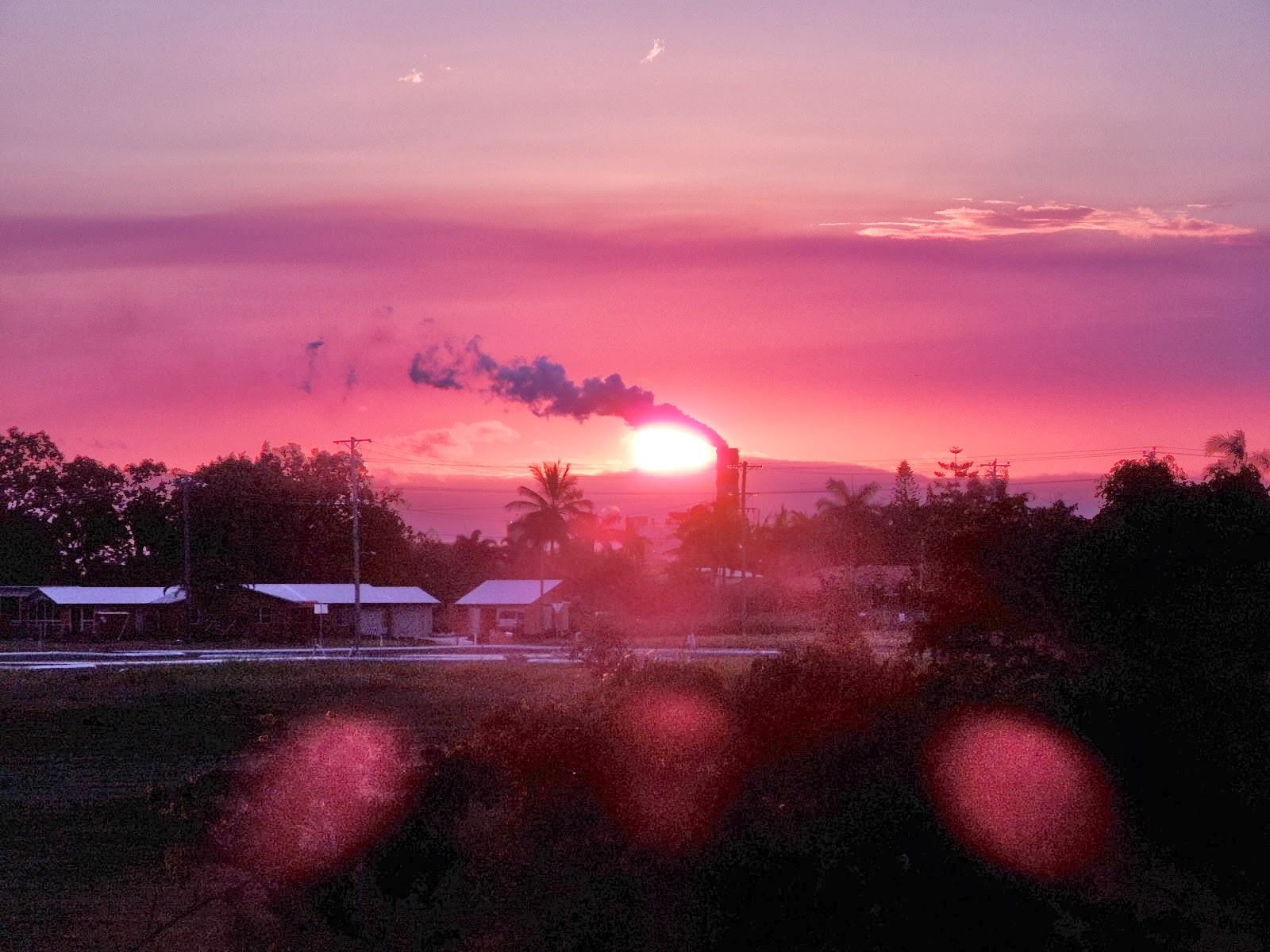 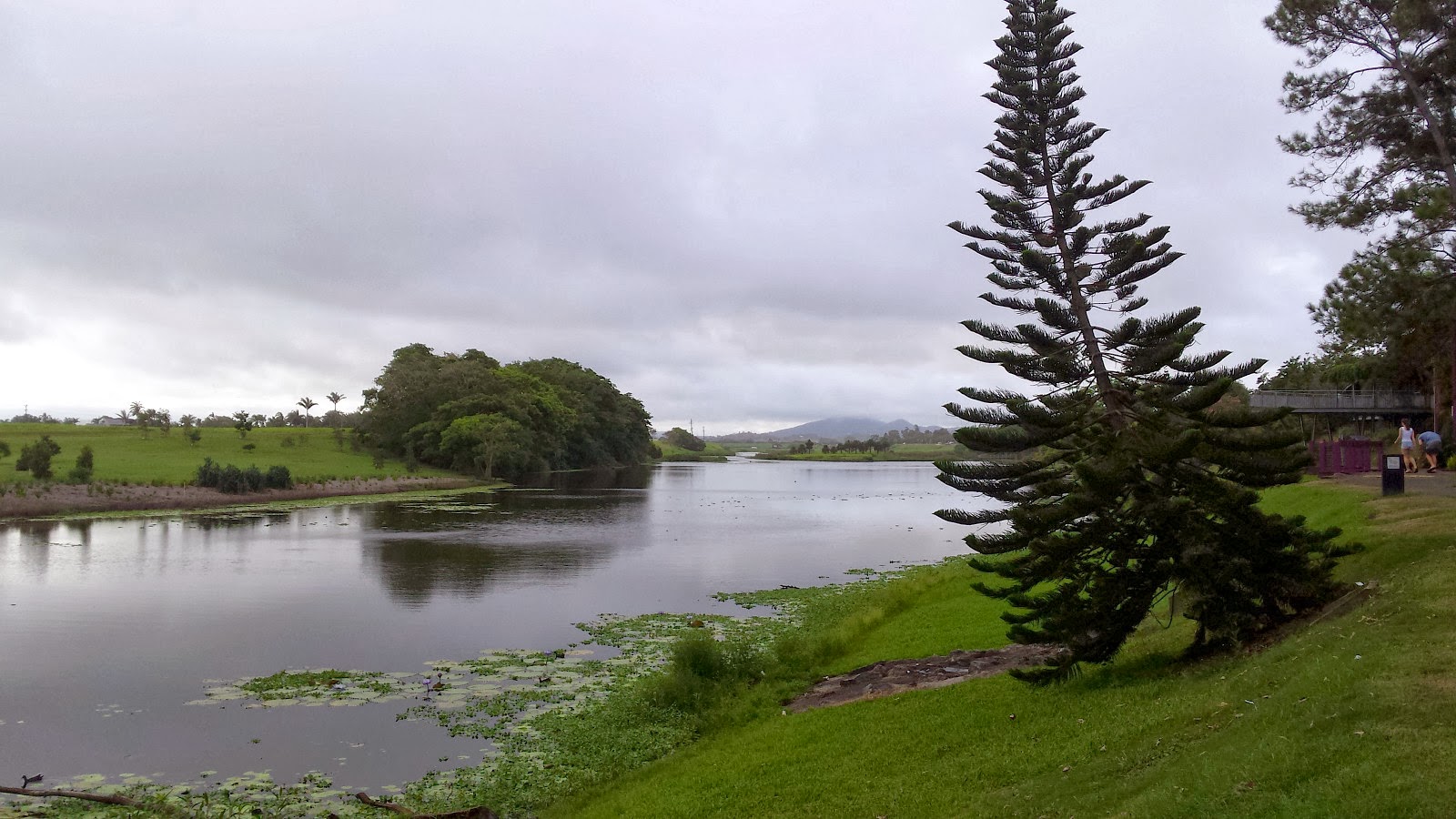 We have had quite a bit of rain since then, but Jock and I went walking yesterday afternoon in the very light mist - the lagoon is looking very peaceful 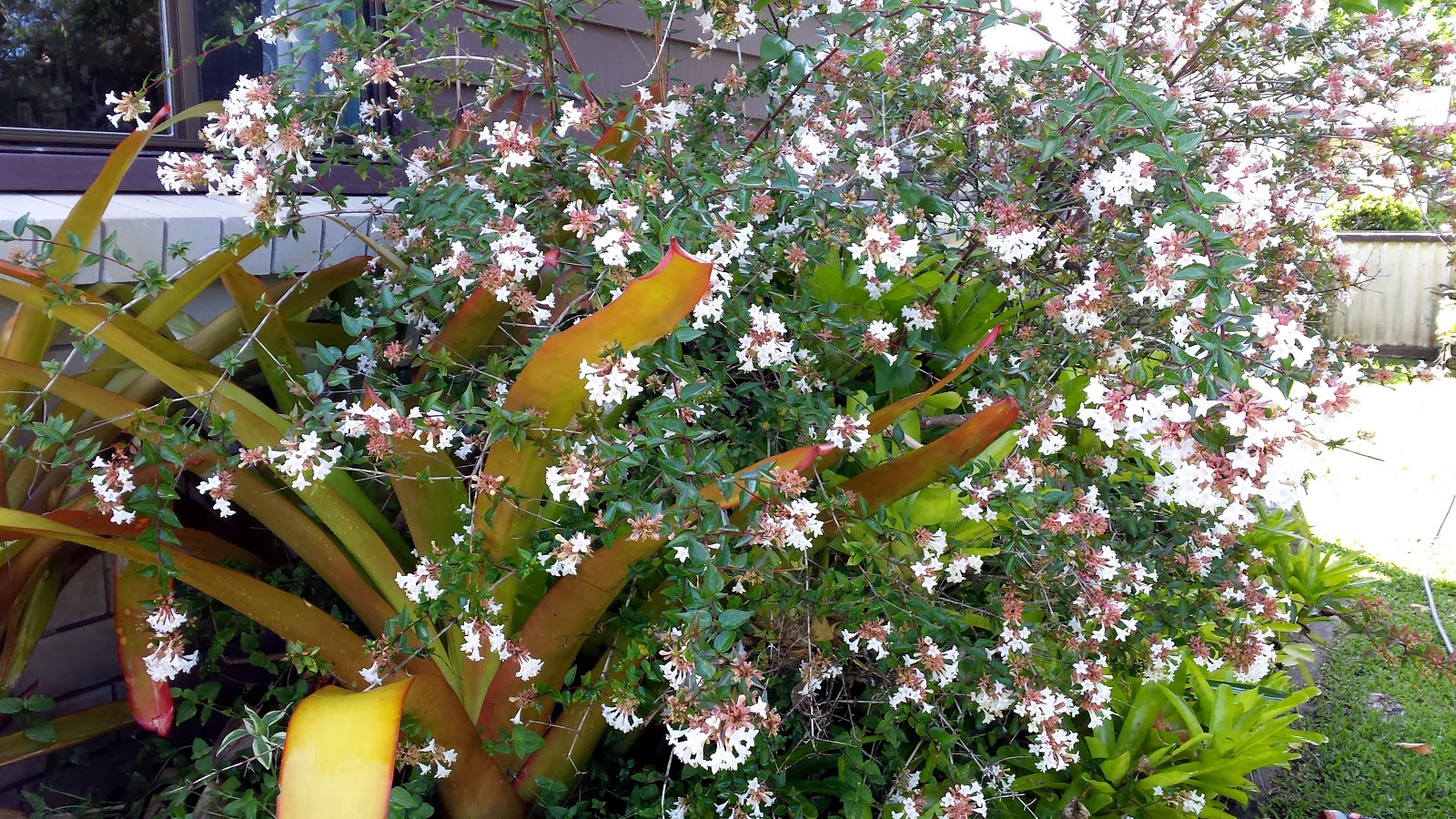 My abelia shrub is flowering profusely at present.  The bees and the honeyeater birds love it, but I am never fast enough to catch them.  This was one of the first shrubs we planted in the garden after our marriage.  The bromeliads are climbing all through it now, I probably should remove them, but they look attractive.
Of course, my felting has come to a temporary halt - maybe more tomorrow.  I hated this piece when I finished it last Sunday, but I am beginning to see possibilities for embroidery on it now, so maybe the halt was meant! 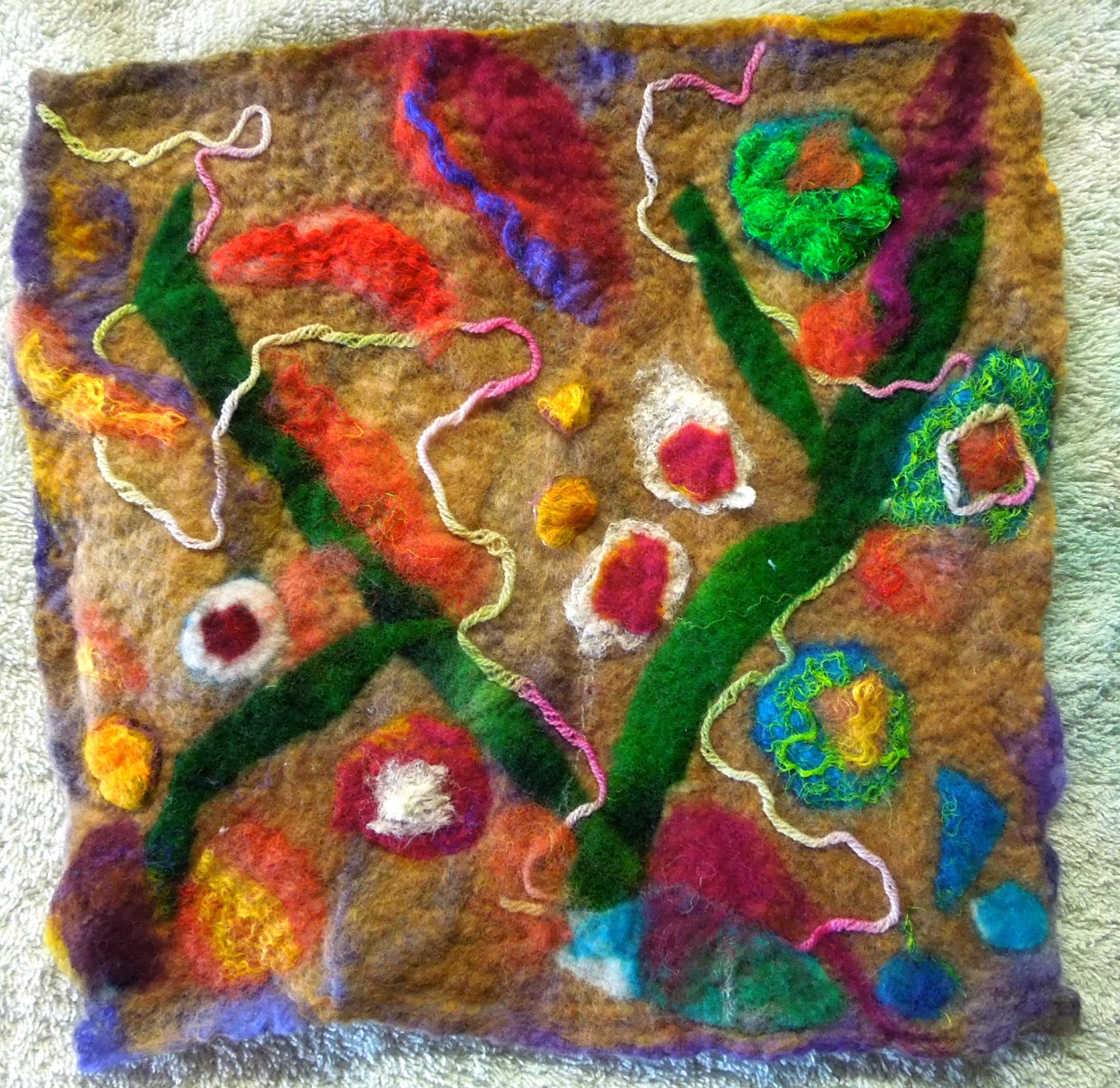 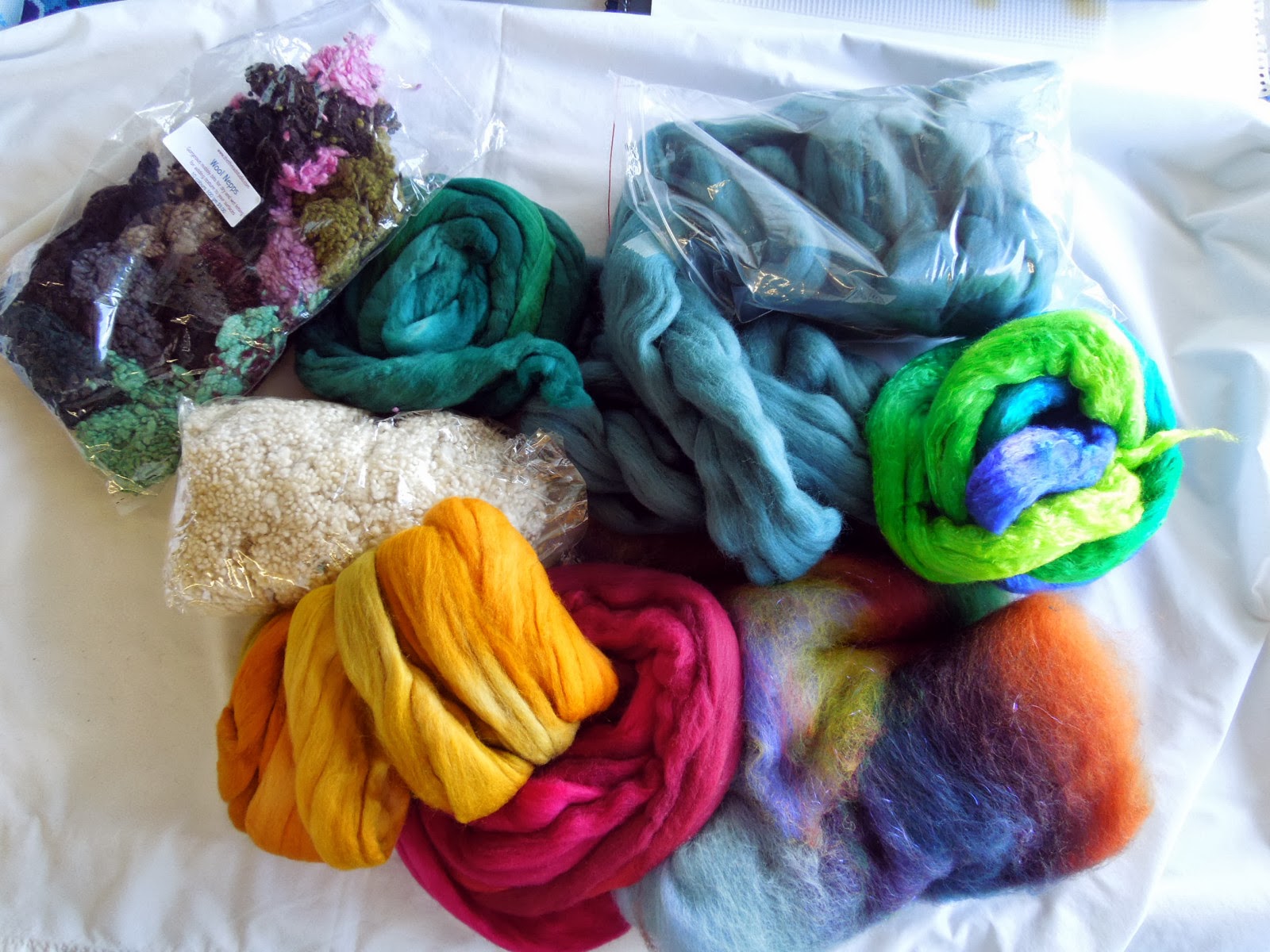 Also during the week I received these beautiful wool and silk fibres, also a couple of packets of nepps.  I had never heard of them till I saw Jackie demonstrating them.  They add wonderful texture to the pieces.  Maybe I will have something to show you early next week.  Have a lovely weekend.
Posted by Robin Mac at Friday, February 21, 2014 9 comments: 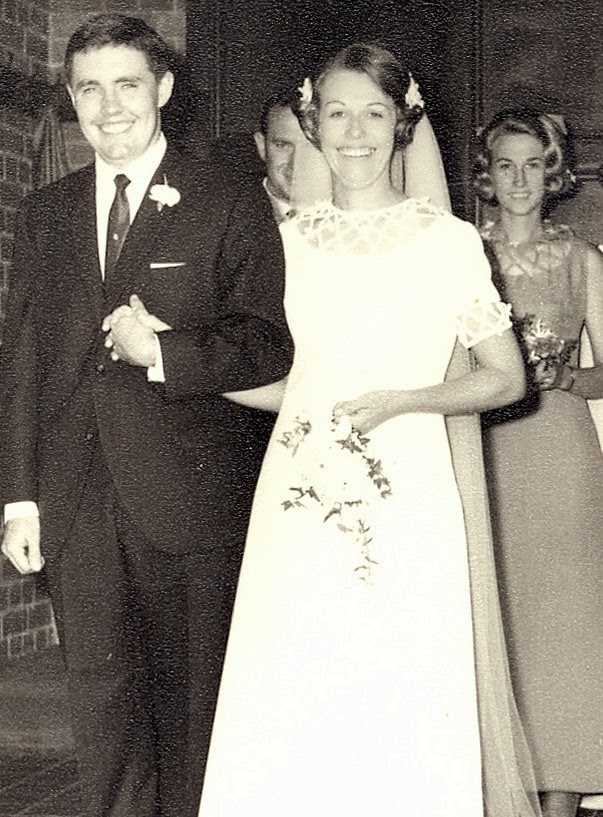 Well, 46 years ago today, this was us - now a very crazed photo - but the best I could scan.  I remember it was a very hot, thundery day, but thankfully no rain during the wedding time.  I was very cross with the limousine driver who kept going round the block and would not go to the church as he said there were still too many guests outside!  I ended up being late, which I had determined not to happen!  Nobody minded though.

I am loving Jackie's videos, but I am very frustrated as I want to be able to spend a day felting and following up on all the ideas she has given us - and life keeps getting in the way.  The 'silly season' has ended, school has gone back and all the community groups have woken up.  Together with the seemingly constant round of medical appointments there has been very little time to do much felting. 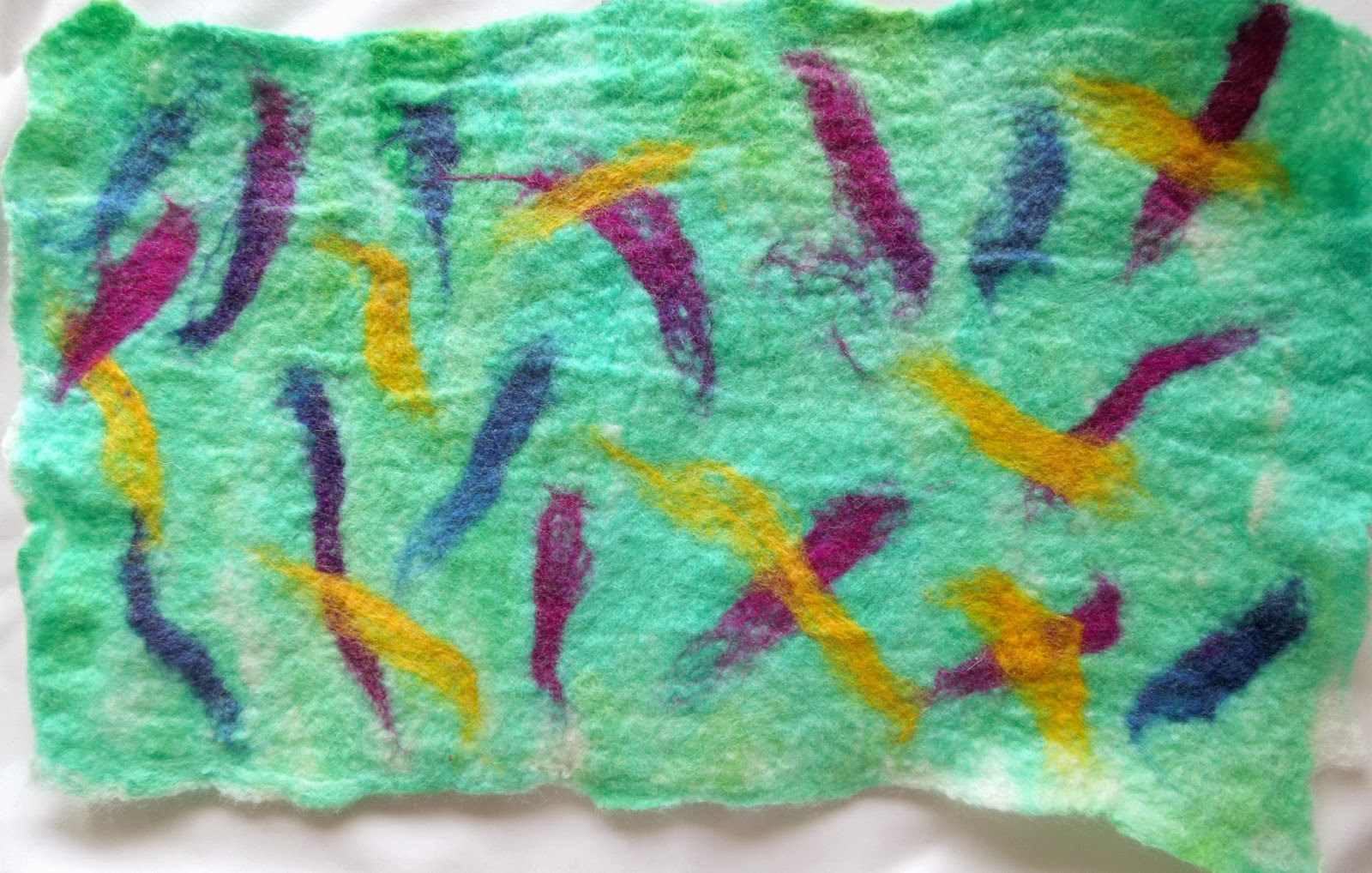 These were two pieces from the first couple of lessons, just laying fibres on the base fibres and felting. 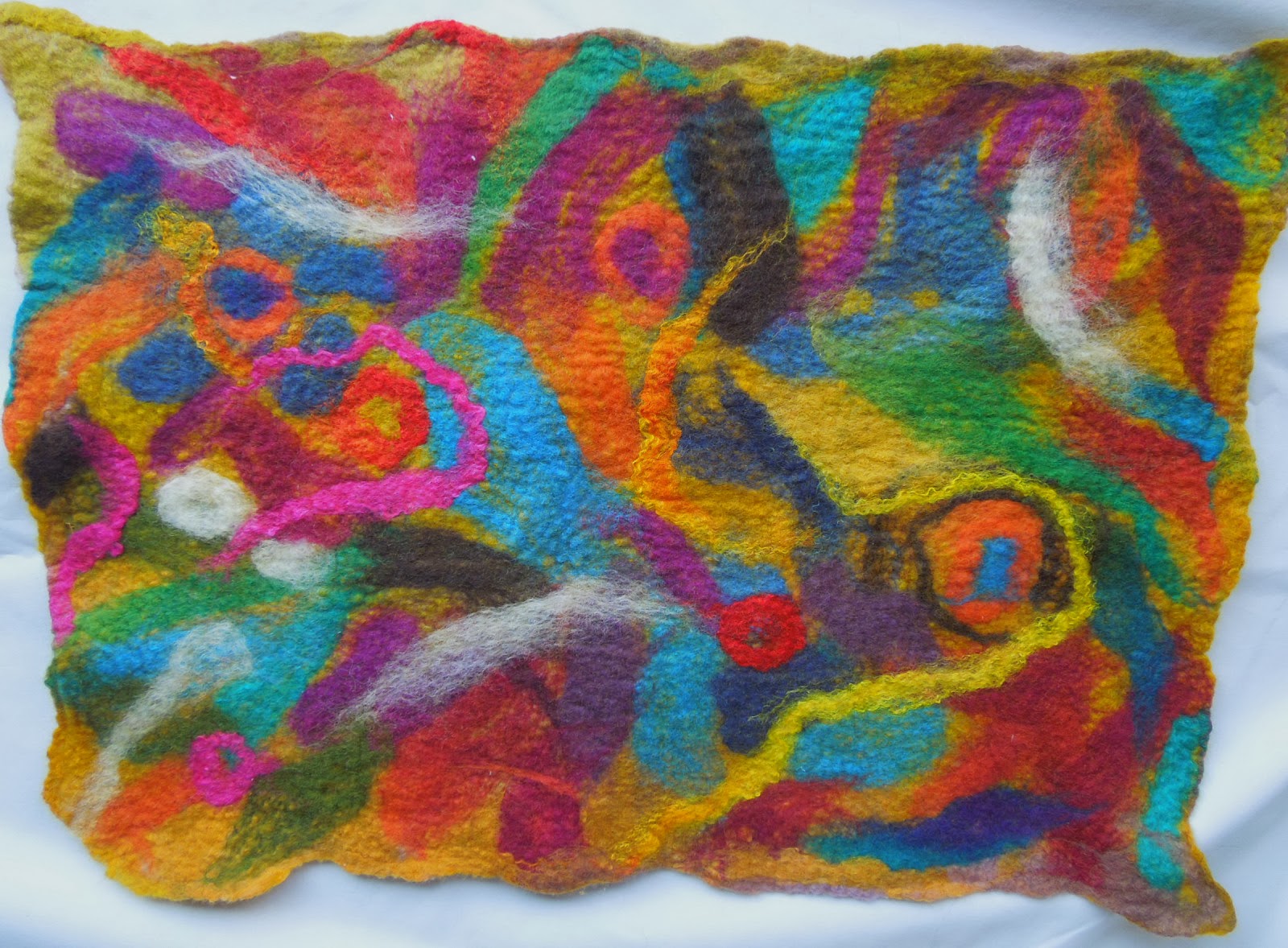 Now we have been shown how to make pre-felts and place them on a base to felt - much more interesting.  Hopefully tomorrow I might get to try them out.
I am off to make a case for Bill's new reading glasses.  He carries them in the pocket of his shirt and they get badly scratched - and they are too costly to let that happen with the new ones!
We are actually having a wet morning here, thunderstorms around, but not too close - close enough for Jock to think he needs to attack though.  He is not in the least frightened by thunder, lightning or fireworks - just wants to attack whatever it is.
Posted by Robin Mac at Sunday, February 09, 2014 7 comments:

We have had a weak category two cyclone cross the coast just north of us early yesterday morning.  The rain (about 160 ml) was very welcome, but the wind we had for the previous three days was definitely not! 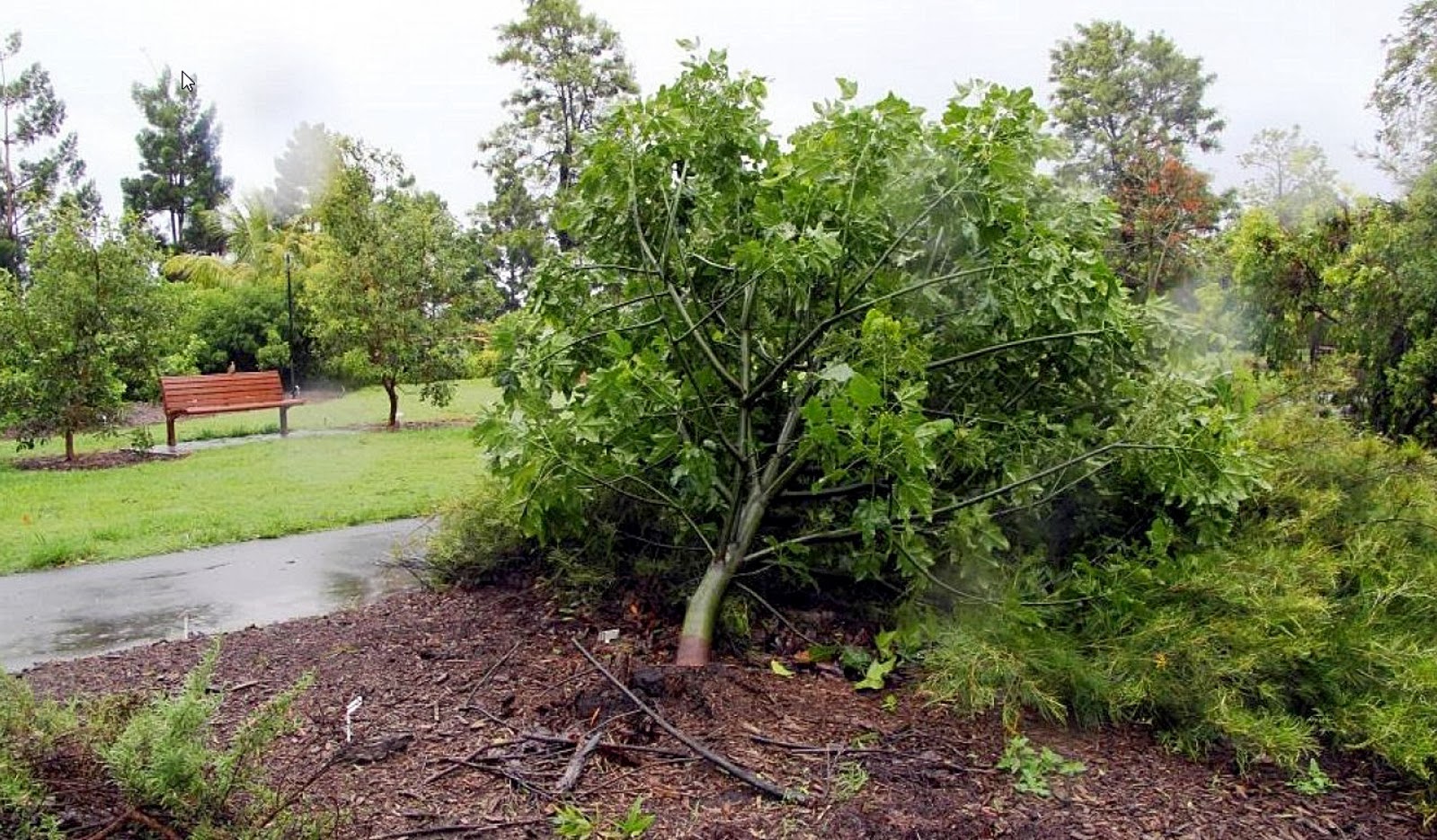 The botanic Gardens lost several trees and had lots of branches broken off, but the damage could have been a whole lot worse. 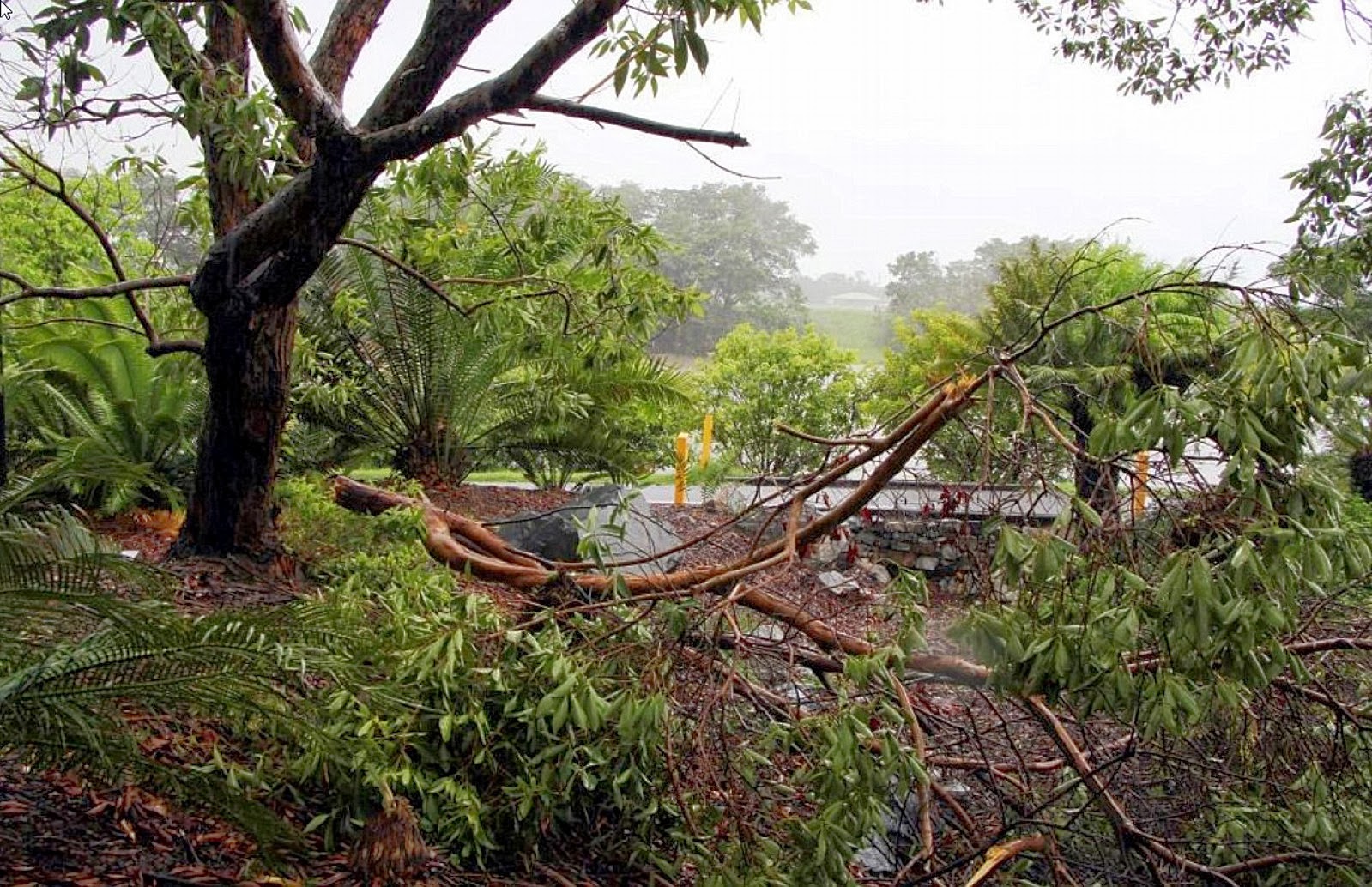 The big panic had been that the predicted time for the cyclone to cross the coast would have clashed with the top of the biggest tide of the year - 6.56 metres.  The storm surge was predicted to be another 2 metres above that.  Thankfully Dylan decided to move in a hurry and crossed the coast nearly eight yours ahead of schedule. 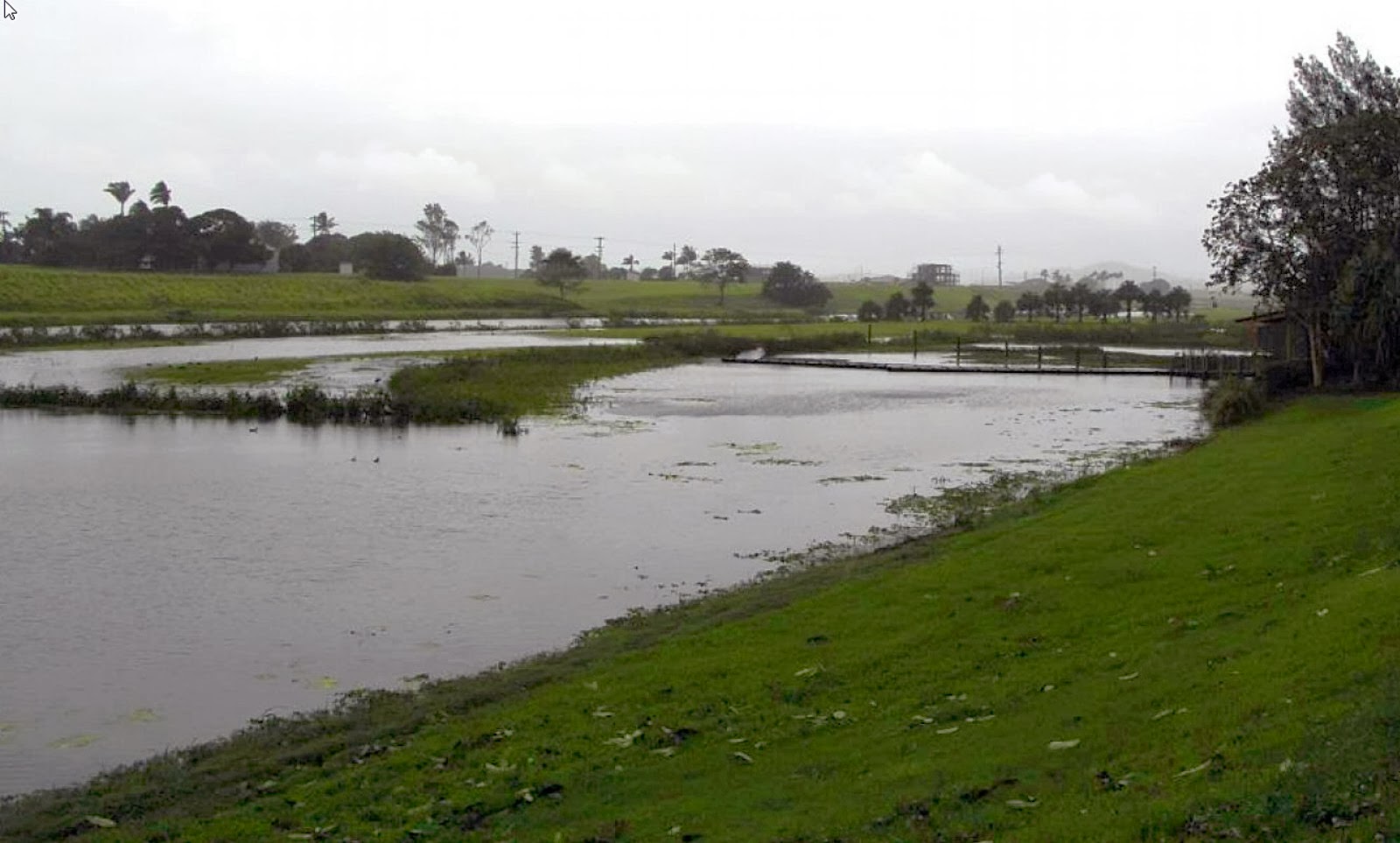 This photo is of the Eulamere lagoon at the Gardens, taken at the peak of the King tide.  The water did not even cover the boardwalk in the distance.  Hopefully a lot more of the noxious lettuce weed will have been washed out to sea though.  There were some low lying areas of Mackay which were flooded, but that always happens with the King tides.
We had a couple of days of lovely cool weather, but it has turned with a vengeance today - very, very humid and quite hot.
I need to go and rake up some of the leaves all round the garden, they will have dried out by now.  At least everything looks beautifully green round here, and the mowing contractors came to mow the lawn on Wednesday, so that is a joy to look at also.
I still have nothing crafty to show, but I have started doing a felting course with Jackie Cardy, so I should have something soon.
Posted by Robin Mac at Saturday, February 01, 2014 7 comments: