More from around our garden

I very much dislike this new system!  I have just lost a whole post when I  tried to put up some photos - why on earth doesn't blogger leave well alone.  This change seems to have happened in the last ten days since my previous post.  My next post would have been sooner but we have had some high drama around here.  Bill woke on Saturday morning (of course it was a weekend) with acute lower back pain and took almost three hours before he could manage to get out of bed and sufficiently dressed for our son to drive us to the casualty ward of the base hospital - not somewhere we would normally frequent but the only place where you can get XRays etc on a weekend.  They were very good, but by the time we finally came home 8 hours later all we knew was that he had acute muscle spasms in his lower back - but the Xrays thankfully showed no nasties like tumours etc.  Several days later we have racked up large bills from numerous doctor's appointment, an MRI, visits to the physio and chiropractor and he is little better, filled with painkillers and totally disgusted with himself.  We were supposed to be flying to Newcastle in NSW on Saturday, staying for a few days, then driving to Canberra via Orange - and area which we have previously passed through but never stopped to explore.  My sister was to come with us and I told her it is all her fault, these plane tickets have a curse on them!  This is the replacement trip for the cancelled trip to Bali in January.  We may still be able to change bookings again (at a cost) and fly to Canberra next week sometime.  Who knows........but old age seems to have caught up with us with a great big bang!

Now I shall attempt to load some photos again.  That is where everything disappeared last time. 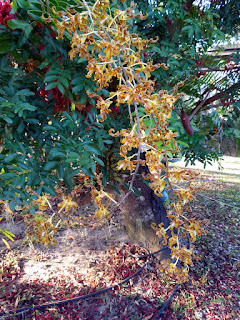 I hope these photos enlarge when you click on them.  This native orchid thankfully looks after itself most of the time, but does look great when it flowers. 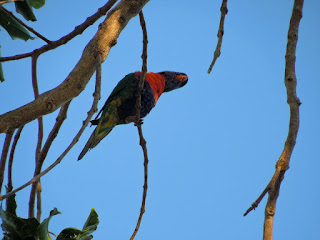 All the noisy rainbow lorikeets are in the flowering trees again, 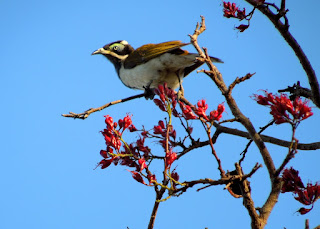 also the blue cheeked honeyeaters who are even more aggressive than the lorikeets. 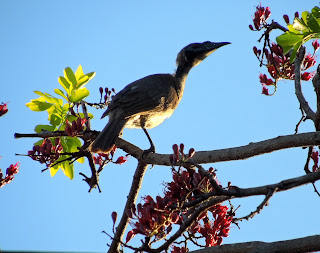 We also have helmeted friar birds - very ugly but very interesting to watch.  These three honeyeaters seem to chase away all the smaller honey eating birds when they are in the trees, but the others com back eventually.

I have loaded these in firefox, which seems much easier than Internet Explorer to manage.
Posted by Robin Mac at Wednesday, October 10, 2012

Thank you for visiting my blog. I do enjoy reading your comments and will reply if you leave your email address.